The Peanuts comic strip started on October 12, 1950. It was considered groundbreaking because for the first time it had little children who were not lovable scamps but, as we see from the very first cartoon below, also expressed emotions like meanness and anger and even hate that people were used to seeing expressed mostly by adults. That this caused some controversy seems surprising these days when we live in an era of South Park.

The Peanuts strip is being run again daily online in sequence, with the first one here, so you can read them again as if you were back in 1950. Note that while the original strips were in black and white, the ones being reproduced have been colorized. I am guessing that the Sunday comics that have been in color for much longer (about a hundred years) were used to get an idea of what colors to use to newly color the daily strips. It is funny how there was such a fuss about colorizing old films but doing the same to comic strips has not been controversial.

It is interesting that although Charlie Brown and Snoopy were there from the beginning, two others Lucy and Linus, who are now seen as central characters, only made their appearance in 1952.

Here is the last Sunday strip that appeared on February 13, 2000, the day after cartoonist Charles Shultz’s death. 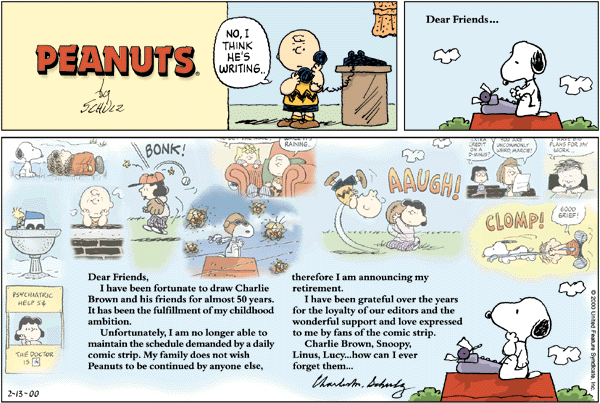 Averages can be tricky » « Getting unnecessary and unwanted things