The Satanic Temple, seems to be expanding its sights yet again as they seek to counter every Christian encroachment in the public sphere by demanding that their own religious symbols be given the same privileges.

In addition to the application to put their statues of Baphomet on the Oklahoma capital grounds, demanding that they be exempt from complying with state policies on abortion counseling because it violates their sincerely held religious beliefs, and requiring a Florida school district to distribute their literature to all its students, they have now succeeded in getting a diorama depicting an angel being expelled into the flames of hell added to the holiday display at the Florida state capital. There it will join the Festivus pole made of beer cans, a decoration honoring the Flying Spaghetti Monster, and a banner a put up by the Freedom From Religion Foundation that says “Happy Winter Solstice.”

Last year, Gretchen Carlson and others at Fox News totally flipped out just over the Festivus pole. I am waiting to see what they say about the Satanist diorama shown below. 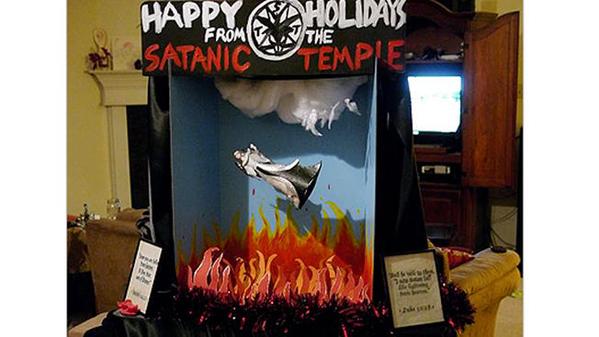