Nobody’s perfect. The fact that actors and writers and other artists may be personally flawed does not usually cause a problem with appreciating their work because we have learned to (mostly) separate the work of the artist from the person of the artist, so that praise for the artistic work does not mean we like or approve of the artist or the lives they lead.

But in some cases that detachment is hard to maintain when the offense is so egregious. Take the case of much-acclaimed director Roman Polanski. He was accused of raping an underage girl and fled the country rather than stand trial. [Update: See the correction to this statement by noastronomer.] He never returned. It is hard to shake off the feeling of disgust that he managed to escape justice for such a serious offense. But should that color one’s attitude towards the films he makes? People who are great admirers of an artist’s work may have an instinctive desire to want to think of him or her as innocent since otherwise they may appear to be condoning reprehensible behavior. This may be why serious allegations against a lot of artists seem to disappear from public consciousness.

What is more disturbing in these accusations against celebrities is that there seems to be an instinctive bias against the accuser and sympathy for the accused. In the case of Roman Polanski, many Hollywood celebrities called for a pardon. That is wrong. We cannot let the quality of the artistic output mitigate or excuse or cover up the enormity of an artist’s actions. This rallying around their famous colleague may arise from a sense of self-protection, the fear that if one is a celebrity one can be a target for malicious reasons from people who are either jealous or wanting to gain publicity or money or revenge.

The recent case of Woody Allen came to the fore when he received a lifetime achievement award from the Golden Globes. It brought back the well-known story of how Allen and Mia Farrow began dating in 1980 but in 1992, at the age of 56, he left Farrow and took up with her 21-year old daughter Soon-Yi Previn, adopted while she was in an earlier marriage to Andre Previn. Allen and Soon-Yi Previn got married in 1997.

I knew about that case but there also emerged a story that I had not been aware of and that was that in 1992 Allen was accused of sexually assaulting then 7-year old Dylan, the daughter that he and Farrow adopted. The prosecutor had apparently said back in 1992 that he had the evidence to take the case to court but decided not to because of the trauma that would be inflicted on the child. Jessica Winter reviews the details of that case. This story exploded into the media this month when New York Times columnist Nicholas Kristof published an open letter by Dylan Farrow.

I must say that I was surprised that this story, so much worse than the one about Soon-Yi, seemed to have been largely ignored until the Globes award. Maureen Orth’s shocking article in a 1992 issue of Vanity Fair about the Dylan Farrow case seemed to have disappeared from the radar.

Woody Allen is not the only beneficiary of such media amnesia. Tom Scocca writes about how the multiple drugging-and-sexual-assault accusations against Bill Cosby seem to appear briefly and then quickly disappear because “Basically nobody wanted to live in a world where Bill Cosby was a sexual predator. It was too much to handle.”

The allegations against Allen are awful and undoubtedly color the way one views both Allen and his work. But in the absence of certainty either way, where does that leave us? We cannot shut these people out of our lives because their artistic creations keep them in the spotlight. Cartoonist Matt Bors illustrates the dilemma. 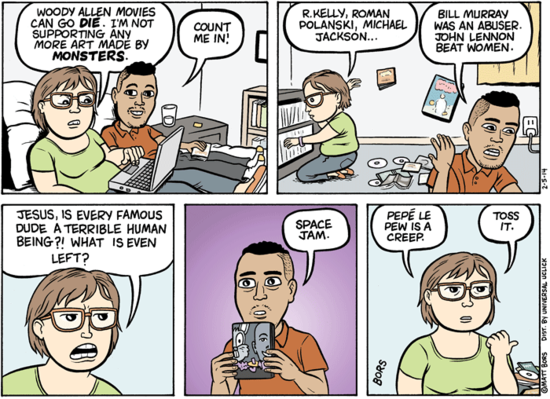 Abuses that take place within families, especially when they involve young children, are notoriously hard to get at the truth. We may never definitively know. Of course, this is the age of the internet and Allen’s past writing have been pored over to reveal any clues to his psyche and they do seem to reveal a disturbing pattern. Ashley Miller has tried to thread her way through that minefield (see here and here) by arguing that while we may never know the truth, we can believe one party or the other based on what we do know and in this case, Dylan Farrow seems the more believable.

Similarly Kathleen Geier, a self-confessed former Woody Allen fan, has a good article that looks at the role that media gatekeepers play in protecting the reputations of the powerful against charges made by relative unknowns and says that “The more well-acquainted people are with the details, the worse Woody looks.”

Kelsey Miller writes about how she grew up as a devoted fan of Woody Allen films and was also surprised recently to hear of the Dylan Farrow story and how it has led to conflicted feelings about how to deal with artists and their creations.

Am I weak for hanging on to my well-worn Annie Hall DVD? If Dylan was my sister or my friend, I know I’d throw it away in a heartbeat. Can you love a piece of art, knowing the artist who created it is an imperfect, perhaps even evil person? What about Roald Dahl, a public anti-semite? Or Walt Disney, whose own questionable past was called into question just last week? Are we going to deny our children Matilda or Mary Poppins? After all, what good could it possibly do at this point?

So, can we still love the work of Woody Allen? For me, the answer is an uneasy “yes.” Because, I do. To say I’ll stop would just be another lie in a situation already mired in falsehoods and overlooked facts. So, I think we can still love the work of Woody Allen, but under one condition: This part of his story is told. No more burying the bad beneath the slightly less bad. And, certainly, no illusions that the whiny, hypochondriac charmer onscreen is anything more than a character he created. I believe Alvy Singer is an underdog. I believe Woody Allen is a child-molester.

William Warwick writes a moving first-person account about his own sexual abuse as a child at the hands of his father and says that it is a mistake to view such people as monsters because that obscures the reality.

If Woody Allen is now written into history as a monstrous child molester, child abuse is more likely to continue. Because if we are unable to stomach the fact that Woody is not a monster but a human being who did something monstrous, we will continue to stoke the fires of archetype, perpetuating the notion of the picture-perfect pedophile, the one whose evil shines through like a 100-watt black lightbulb.

It is truly disturbing to think that the nice neighbor or friend or relative is a child abuser. But we should not let our incredulity cause us to summarily dismiss the claims of the victims either. These situations are unbelievably messy and hurt everyone but trying to simply ignore or repress them seems hardly the right way to go about addressing the problem.