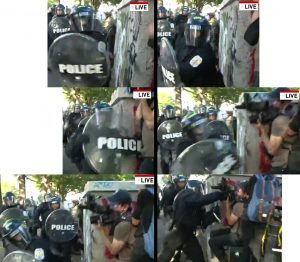 Trump held a press conference in the Rose Garden today about the protests. Naturally, he was late, and naturally it was full of bluster and sabre-rattling. But then something astonishing happened: nearby, police charged into a group of peaceful protestors, firing teargas and flash-bangs, plus using horses to push everyone back. Live on TV, an Australian news crew was attacked by police. Multiple press accounts stressed that the protesters were non-violent. Why on Earth would the police do such a thing?

President Trump was angered by coverage that he was rushed to the underground bunker during protests Friday night and told aides he wanted to be seen outside the White House gates, per Kevin Liptak, leading in part to his walk to St. John’s today.

Simple: Trump wanted it, so he got it. A juicy photo-op, full of images of Trump looking tough and serious as he walked a few blocks to a church, waved an upside-down bible around, and walked back. For contrast, just this morning President Obama wrote an article where he drew on his experience as an organizer to give pointers on how to change police tactics in the US of A. Joe Biden met with protestors and local leaders to discuss police reform. Trump’s actions aren’t that of a president.

They’re the actions of a king.

Consider: the police moved to clear the path to the church at about 6:35 PM, as you can see from the live news feed. There was a curfew due to take effect at 7:00 PM, though. Trump could have waited half an hour and had his photo op. He didn’t, because while others may wait for the king, the king never waits for others. Consider also who he tear-gassed to get his photo op.

I am deeply shaken. I did not see any protestors throw anything until the tear gas and concussion grenades started, and then it was mostly water bottles. I am shaken, not so much by the taste of tear gas and the bit of a cough I still have, but by the fact that that show of force was for a PHOTO OPPORTUNITY. The patio of St. John’s, Lafayette square had been HOLY GROUND today. A place of respite and laughter and water and granola bars and fruit snacks. But that man turned it into a BATTLE GROUND first, and a cheap political stunt second. I am DEEPLY OFFENDED on behalf of every protestor, every Christian, the people of St. John’s, Lafayette square, every decent person there, and the BLM medics who stayed with just a single box of supplies and a backpack, even when I got too scared and had to leave. I am ok. But I am now a force to be reckoned with.

That isn’t just some rando who happened to be nearby. That’s Reverend Gini Gerbasi, a former Rector of St. John’s cathedral. She and at least one active priest of St. John’s were driven away from their church by police and tear gas, so Trump could pretend to be tough. They weren’t notified, and why would they need to be? The king does as he wishes, with whom he wishes. And that’s not even getting into the military helicopters illegally buzzing protesters.

Kings are flesh-and-blood humans, and that makes them as weak and vulnerable as the rest of us. Yet their kingly status derives from divine intervention. How do they settle this conflict? One way is by projecting strength. Trump has no problem wearing a mask to protect against COVID-19 in private, yet he refuses to do so publicly because it makes him look human. He has serious health issues, yet either fudges, obscures, or refuses to get a medical test because that would reveal he’s human. Embarrassed by news coverage that revealed he was scared of protests as he hid in a bunker with the lights out, he projected strength with said photo op. This often leads to overcompensation, where he’s obsessed with domination, appearing strong at all times, and finds joy in violence.

More practically, kings surround themselves with thugs willing to kiss their ring and do the dirty work. Trump has William Barr, who’s happy to lie and bend the law to its breaking point to please his king, to the point of imitating his master. He has General Mark Milley, who had no qualms posing with Trump and projecting military authority into a civilian sphere. He has his toady Mitch McConnell, who deliberately prevented the previous president from appointing judges so he could flood the courts with biased judges, and has spent years trying to rig elections and turning a blind eye to foreign interference to benefit a Republican president. He has other Republicans who endorse his calls for violence against innocent Americans and gladly parrot their king. He has Fox News, who spread misinformation to help keep him in power. He has foreign agents in Russia, working to protect his power in ways that are illegal on American soil. And the past few days have shown the secret service and multiple levels of Federal law enforcement will do his will, with the military following shortly.

For the past four years, Trump has been putting pawns into place to ensure his power over America continues past the 2020 election. As a former thug of Trump put it last year,

I did things and I acted improperly, at times at Mr. Trump’s behest. I blindly followed his demands. My loyalty Mr. Trump has cost me everything, my family’s happiness, friendships, my law license, my company, my livelihood, my honor, my reputation and soon my freedom. And I will not sit back, say nothing, and allow him to do the same to the country.

Indeed given my experience working for Mr. Trump I fear that if he loses the election in 2020 that there will never be a peaceful transition of power, and this is why I agreed to appear before you today.

Today, America, is the day Trump finally became your king. Take a deep breath, pick yourself up, and carefully consider your next move.