Its been over a month since the White House’s forced separation policy hit the news, which should be plenty of time for the polls to show an effect. So, how have US citizens reacted? Here’s FiveThirtyEight’s aggregate numbers, from June 1st up until Helsinki. 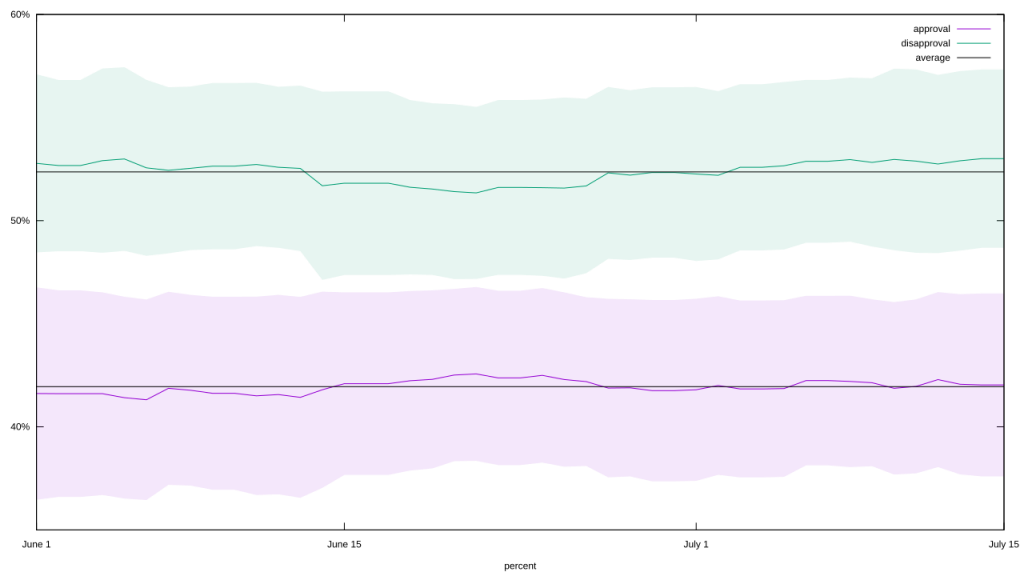 … Wwoooow. We have recordings of crying children, lawsuits from states and organisations alleging inhumane treatment, tonnes of ink spilled over civility and ruined dinners, and yet Trump’s numbers haven’t budged. What gives? One hint comes when we break down the approval numbers by party; I’ll turn to Gallup’s numbers, in particular. 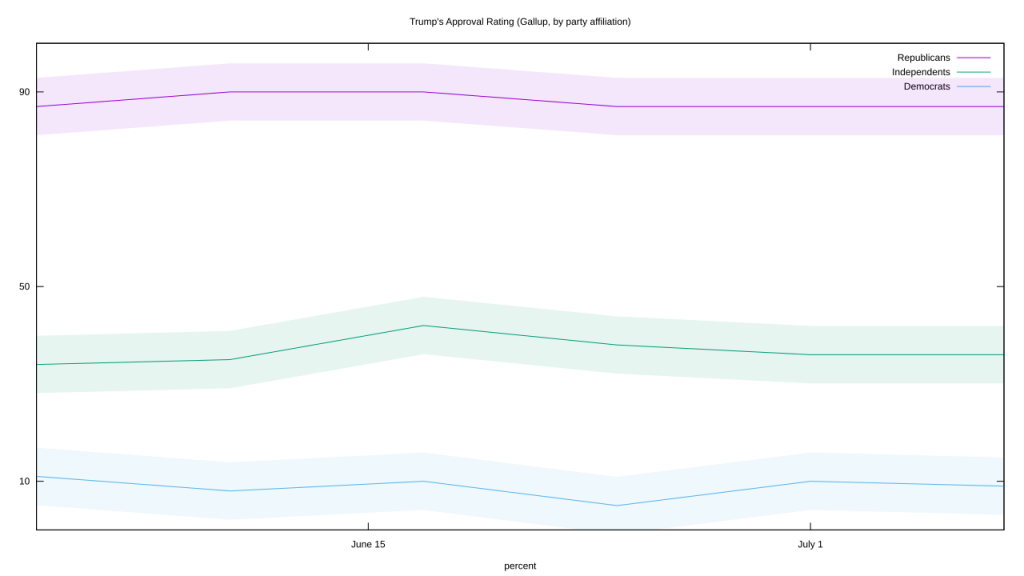 Believe it or not, I think those numbers underestimate partisanship. Human beings are imperfect, can misunderstand questions that seem clear and concise, and have only a middling grasp of the skeptical process. A small fraction of them can believe practically anything, as a result; for instance, another poll by Gallup found that roughly one in five Americans believe that witches exist, while just under one in ten are convinced spirits or ghosts can take over someone’s body. According to Pew Research, roughly one in five self-described atheists believe in a “higher power or spiritual force,” and about 1% of self-described Christians don’t believe in anything that could be called a deity.

You don’t find the same extremes in the opposite situation; at worst, Pew Research found that only 20% of Americans without a high school education could say what determines the amplitude of a sound wave. In almost every other category of their survey more people had a grasp of the science, and in most cases it was substantially more. I bet less than 5% of any country’s population could give a quantum account of index of refraction, but this can be easily accounted for by ignorance; it’s a lot tougher to be ignorant of the devastation caused by Trump’s policies when they are splashed all over the news.

It’s a pretty safe assertion, then, that if you find an 85-15 split or worse in a poll result, you can dismiss the 15 side as crackpots or confused. This implies that self-declared Democrats are effectively unanimous in opposition to Trump, while some mental math finds Republicans only slightly less unanimous in support of Trump. But this implies everyone has made up their mind about Trump, pro or con. Look at the independent voters: if they were primarily made of the undecided or on-the-fence, Trump’s recent cruelty should have triggered a move. If they are primarily an oil/water mixture of Trump lovers and haters, however, the numbers would remain flat. There’s a pro-Trump bump on the 17th, but it doesn’t last. Click through to Gallup’s latest numbers and independent voters are back to where they were in January; this is more consistent with oil and water then fences.

But again, people are imperfect. A majority of Americans opposed Obamacare, but a majority were in favour of every change it made save the individual mandate; meanwhile, roughly a third of Americans didn’t know Obamacare and the Affordable Care Act are synonymous, and roughly half didn’t know that if Obamacare was repealed then so too was the ACA. It’s quite possible that “do you support Trump?” has become a marker of identity, but that doesn’t necessarily translate into “do you support Republicans?” The latter is more important for November of this year, as Trump isn’t listed on any ballot (though he may as well be). 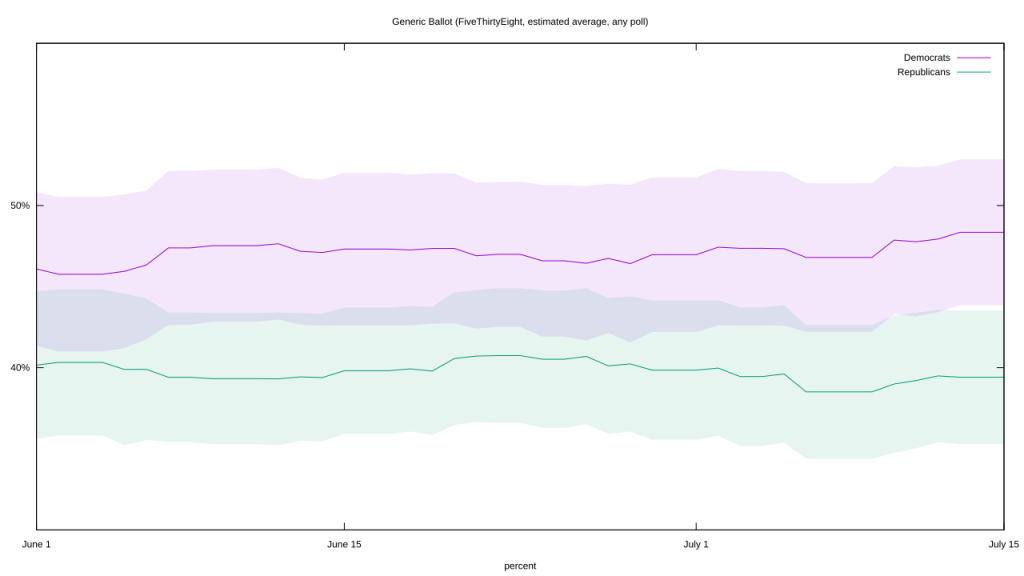 Fortunately, US pollsters have asked a similar question for a while: would you vote for a Republican or Democrat, in general? In FiveThirtyEight’s collection, we actually detect a faint bit of movement, with support for Democrats rising while Republicans stay pretty flat. I can confirm and quantify that by feeding it into a Bayesian linear fit. On the Democrat side, 67% of 10,000 trendlines drawn from the posterior are positive, whereas the equivalent number for Republicans is 39%. There’s a lot of uncertainty and no way to ascribe causality, but the needle appears to be slowly moving.

When we expand our scope to other indicators, things look even more favorable for the Democrats. Harry Enten has pointed out that organizations which assign qualitative labels to individual House races show a lot more vulnerable Republicans than Democrats, on the scale of wave elections in the past. People tend to throw data they don’t like in the file drawer, including polling groups with a strong partisan affiliation. This time around, Democrat-aligned groups are publishing far more polls than Republican-aligned groups, consistent with a Democrat wave election. Add in a few unforced errors by Republicans, and there’s a lot of room for optimism in the numbers.

But if you thought ripping kids from their families would have caused a major shift in American opinion, like I did, the same numbers are a huge disappointment.

Obstruction of Justice » « The Cold Calculus of Hiking