Gawd, Enlightenment Now is turning into a slog. Let’s take one passage as an example:

Most surprises in history are unpleasant surprises, but this news came as a pleasant shock even to the optimists. In 2000 the United Nations laid out eight Millennium Development Goals, their starting lines backdated to 1990. At the time, cynical observers of that underperforming organization dismissed the targets as aspirational boilerplate. Cut the global poverty rate in half, lifting a billion people out of poverty, in twenty-ﬁve years? Yeah, yeah. But the world reached the goal ﬁve years ahead of schedule. Development experts are still rubbing their eyes. [Angus] Deaton writes, “This is perhaps the most important fact about wellbeing in the world since World War II.” [pg. 94]

That smelled like something worth researching, so I dug in. After plotting a counter-argument involving how that progress has been made, I read ahead to make sure I wasn’t taking Pinker out of context or missing something, and guess what?

Hundreds of millions of people remain in extreme poverty, and getting to zero will require a greater effort than just extrapolating along a ruler. Though the numbers are dwindling in countries like India and Indonesia, they are increasing in the poorest of the poor countries, like Congo, Haiti, and Sudan, and the last pockets of poverty will be the hardest to eliminate. Also, as we approach the goal we should move the goalposts, since not-so-extreme poverty is still poverty. In introducing the concept of progress I warned against confusing hard-won headway with a process that magically takes place by itself. The point of calling attention to progress is not self-congratulation but identifying the causes so we can do more of what works. [pg. 94]

Pinker admits that progress towards the Millennium goal of reducing poverty has been uneven, stepping on the argument I was going to make! Here’s what the UN’s official report has to say about that, in fact:

The world’s most populous countries, China and India, played a central role in the global reduction of poverty. As a result of progress in China, the extreme poverty rate in Eastern Asia has dropped from 61 per cent in 1990 to only 4 per cent in 2015. Southern Asia’s progress is almost as impressive—a decline from 52 per cent to 17 per cent for the same period—and its rate of reduction has accelerated since 2008.
In contrast, sub-Saharan Africa’s poverty rate did not fall below its 1990 level until after 2002. Even though the decline of poverty has accelerated in the past decade, the region continues to lag behind. More than 40 per cent of the population in sub-Saharan Africa still lives in extreme poverty in 2015. In Western Asia, the extreme poverty rate is expected to increase between 2011 and 2015.

I keep tripping across similar situations. I’ll see Pinker make a point, run off to do research on it, then find he’s undercut his own point later. Which one sticks in your mind depends on your biases: if you think that we’ve made remarkable progress and can sit on the status quo, you’ll remember the part about cutting poverty and downplay the recognition that things have been uneven; if you think we’ve done well but can improve further, you’ll be thankful for the recognition that things could improve and might be tempted to forgive his fanciful flights.

But this can lull you from looking at the whole picture. That $1.25 a day was based on the poverty rates of the poorest 10-20 countries, yet the median poverty line in developing countries was $2 a day at the time. Standards of living are different in different countries, so while the UN may declare $13 a day “middle class” in the developed world, $4,748 a year doesn’t come close to the $7,320 you’d need for one bedroom in shared accommodations in Calgary. It’s nonsensical to use a single metric across the entire globe, and to be fair the UN probably realized this; the real goal was less about hitting specific targets and more of an effort to change hearts and minds, as well as open up wallets that were beginning to shut.

Nor were the results all that surprising. Pinker never considers why a set of goals agreed to in September 2000 could be so easily back-dated to 1990. In reality, the Millennium Development Goals were based on ideas that have been floating since the 1990’s, and their basic framework existed as early as 1996. The MDGs were developed by a broad coalition of organizations, and voluntarily agreed to by 189 countries. You wouldn’t have gotten that level of consensus had you proposed bold, risky targets to hit; the MDGs were designed to be achievable, from the very start. They were a PR stunt, albeit one that also saved lives and reduced misery.

Pinker almost leaves China out of the picture, but manages to sneak in this passage:

Cynical explanations, such as that the enrichment is a one-time dividend of a surge in the price of oil and other commodities, or that the statistics are inflated by the rise of populous China, have been examined and dismissed. [pg. 94]

Except, as I quoted earlier, the UN themselves admit that China’s progress was instrumental in reaching the Millennium goal for poverty. Pinker’s citation which tackles this head-on sets up a straw-person – “The global decline of extreme poverty – was it only China?” – then easily knocks that down by showing that China merely played a significant role in reducing the global poverty numbers. 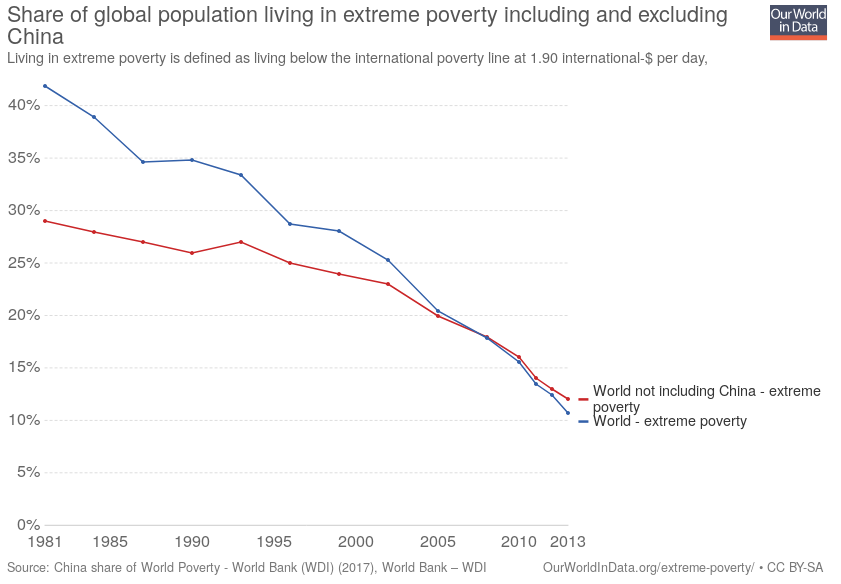 If we’re to look at the two biggest successes for clues in reducing poverty, as Pinker suggests we do, we should then focus on becoming more autocratic and more liberal, more protectionist and more free-trade, plus more censorious and more censorious. Reality is much more complicated than he presents, and even the shades of gray he injects are less about honestly reflecting the real world than an attempt to distract and frustrate his critics. His grandiose pronouncements and simplistic graphs are proof of the latter. I mean, just look at this: 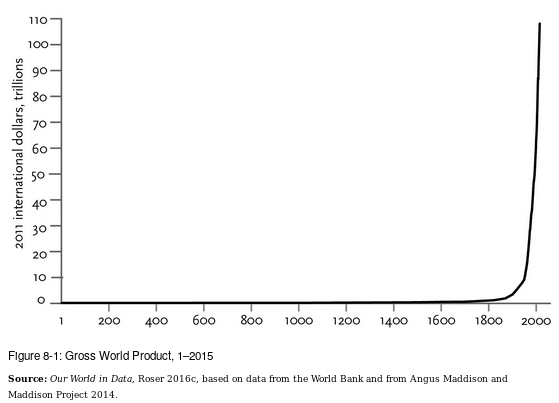 To generate that graph, you need to estimate the annual output of all human activity across two thousand years, then you need to correct it for differences in purchasing power and inflation. I’m surprised Pinker didn’t quote the guy who spanned a million years with similar techniques instead, he seems less cautious than the source Pinker used.

Limitations to data quality also means that estimating the growth of GDP per capita over many decades, or even centuries, is a hazardous undertaking that, despite the best effort of statisticians and researchers, will always be surrounded by a degree of uncertainty. As a result, earlier estimates of relative income levels diverge substantially from standalone benchmark comparisons or independent estimates of relative income for those early periods.

Income for pre-1500 populations were estimated by figuring out how many people were in extreme poverty, then assigning them an income of $1.25 a day. As Pinker himself notes, purchasing power adjustments are done by assuming things like loaves of bread and beer have a fixed value over all times and places. The global GDP was calculated by estimating the growth of GDP per capita per year, converting that into GDP per capita, then multiplying by world population estimates, a method the Maddison Project acknowledges can lead to “implausible results.”

The graph has so many assumptions built in it’s not worth the photons. Yet Pinker puts it in the front of his chapter on wealth, calling the chart “simple but stunning” and spending three paragraphs hyping it up. He then turns around and spends three paragraphs pointing out some (but not all) of its limitations, and concludes “A person whose wallet contains the cash equivalent of a hundred 2011 international dollars today is fantastically richer than her ancestor with the equivalent wallet’s worth two hundred years ago.” The 1818 equivalent of $100 is substantially less than the 2018 equivalent of that same $100?

An honest inquiry into poverty wouldn’t have featured that graph. But attempting to show that demands a helluva lot of research and dead ends, in Pinker’s case. Ugh.