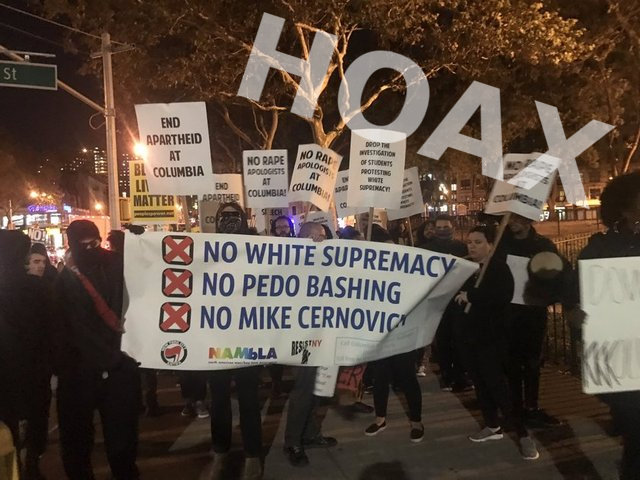 No? OK, here’s a refresher: Mike Cernovich was due to speak at Columbia University, which naturally raised the ire of decent people and resulted in plans to protest. A group of Cernovich supporters, disguised as protesters, sidled up to the group and unfurled a banner which implied they were in favor of pedophilia. Journalist Jake Offenhartz grabbed a quick photo, talked with some people, realized what was going on, and posted a quick note to Twitter. Undaunted, the Alt-Right removed the context from the image and promoted it as legitimate. No less than Donald Trump Jr. joined in the smear, which hoped to turn the general public against AntiFa by linking them with the unforgivable sin of pedophilia.

Leigh Corfman says she was 14 years old when an older man approached her outside a courtroom in Etowah County, Ala. She was sitting on a wooden bench with her mother, they both recall, when the man introduced himself as Roy Moore. […]

Alone with Corfman, Moore chatted with her and asked for her phone number, she says. Days later, she says, he picked her up around the corner from her house in Gadsden, drove her about 30 minutes to his home in the woods, told her how pretty she was and kissed her. On a second visit, she says, he took off her shirt and pants and removed his clothes. …

Nine days later, the Washington Post published a story alleging Roy Moore engaged in sexual acts with an underage women, and pursued relationships with two others, in the late 1970’s. They seem to have dotted their “i”‘s in verifying the story, checking old court records and interviewing more than 30 people who knew Moore during that time frame, so it seems likely that a vocal figure in the Republican party engaged in something like pedophilia.

Mike Cernovich: Child sex abuse is not a poltical issue, of course string him up if confirmed. WaPo has history of lying and covering up for Bob Menendez. I’ll see what else shakes out.

Tim Donnelly: my dude i am outraged about bad people in all forms of government from all stripes, at all times, it’s very easy these days. a very simple common ground for us should be to say “people who try to have sex with children are bad,” not be be like “well the OTHER side did it too!”

Mike Cernovich: You’ve never seen what I wrote about Dennis Hastert, obviously, do your homework. I don’t play partisan “games” on serious subject like this.

Mike Cernovich: The media’s lack of interest in Menendez and sudden volume about Moore is startling, that much we can agree on.

Mike Cernovich: Louis CK has been a well known serial public masturbator for years, this isn’t even news. Moore…nothing for 40 years and now *this*?

Shock surprise, when the shoe is on the other foot we find an unhealthy dose of whataboutism and blind tribalism. What’s perhaps a bit more surprising is that the apologetics span more than just fringe Alt-Right figures.

Alabama Mobile County GOP chairman John Skipper: “It does not really surprise me. I think it is a typical Democratic – Democrat – ploy to discredit Judge Moore, a sincere, honest, trustworthy individual.”

If these allegations against Moore were true, Mitch McConnell’s anti-Moore allies would have obviously found them and released them during the primary, Mobile County Republican chairman John Skipper tells me.

Moore supporter [Ed Henry] called the allegations against Moore lies. “If they were really worried about him being a predator or menace to society, why have they not been coming forward for decades?” #alpolitics #alsenate

“Take the Bible. Zachariah and Elizabeth for instance. Zachariah was extremely old to marry Elizabeth and they became the parents of John the Baptist,” Ziegler said choosing his words carefully before invoking Christ. “Also take Joseph and Mary. Mary was a teenager and Joseph was an adult carpenter. They became parents of Jesus.”

That last one in particular stands out, as there’s a distinctly religious angle here.

In 2013, Bill Gothard was accused of sexual assault and harassment by dozens of women whose allegations spanned from four decades. […] Gothard, of course, is not alone. Doug Phillips preached family values while sexually harassing his young nanny; the Association of Baptists for World Evangelism covered for serial pedophile Don Ketcham for decades; Sovereign Grace Ministries covered up child sexual abuse in its churches. The issue extends beyond high profile sexual abuse allegations in evangelical ministries and churches. Eighty percent of white evangelical Christians voted for Donald Trump, a man admitted to sexually assaulting women as a matter of course.

There’s a reason I bring all this up. Namely, the evangelical response to sexual assault and harassment scandals within their ranks has been far different from their response to Harvey Weinstein. It has looked more like this: Everyone makes mistakes. Judge not lest ye be judged. Why are you trying to destroy this man’s life? God has already forgiven him. Let him who throws the first stone be without sin. There are two sides to every story. What about the good this man’s ministry has done? But for the grace of God, there go I.

You would think Christianity, with its heavy emphasis on deontology, would tend to prevent Christians from being moral hypocrites. Instead, the opposite seems true: Christians are more likely to treat people differently based on their group affiliation, more likely to engage in mental pretzels to justify their bad behavior, more likely to hyperventilate when they see someone from an out-group engaging in bad behavior. The evidence is pretty stark.

In 2011 and again just ahead of the election, PRRI asked Americans whether a political leader who committed an immoral act in his or her private life could nonetheless behave ethically and fulfill their duties in their public life. Back in 2011, consistent with the “values voter” brand’s insistence on the importance of personal character, only 30% of white evangelical Protestants agreed with this statement. But this year, 72% of white evangelicals now say they believe a candidate can build a kind of moral wall between his private and public life. In a shocking reversal, white evangelicals have gone from being the least likely to the most likely group to agree that a candidate’s personal immorality has no bearing on his performance in public office.

Apparently, consistency is not America’s strong suit. According to a 2010 study, only about 8% of Americans oppose abortion and the death penalty under all circumstances.

James Unnever, professor of criminology at the University of South Florida Sarasota-Manatee, co-authored the study. He expected his test results to show a consistent belief system in all kinds of premeditated death. In other words, if you believe in the sanctity of life, you would be opposed to euthanasia, the death penalty and abortion.

Turned out, that was not remotely true.

It fits in with a theory I’ve had knocking around in my head for years: bigotry isn’t a side effect of being religious, it’s the whole point. I should get back to posting more Proof of God, as that was the first time I explored this territory and to date is my best attempt at arguing for it.

MythCon Ain’t Over – Part Three » « On the Latest Clinton “Scandal”