Target mood: Get up – Korn and Skrillex

This post is mostly a bunch of things I’m trying to think about right now that are holding up my writing. Sort of a “writer’s block objectified”. Sometimes what it takes to get me motivated is to socially verbalize what I’m feeling strongly about. It does not matter if anyone actually reads or responds to it in the abstract (but that would be nice), what matters is that I put it out there in social space. “Raised social profile” is an emotional experience. It’s the feeling that eyes might be on you so you have to take that into account while you do something. It’s a way of socially manipulating myself to deal with areas where I am working on a personal flaw and could use the motivation (that’s what it feels like anyway). Once it’s out there you feel the need to take it more seriously.

So I’m not saying I’m famous or anything, but it’s amazing what you realize you need to do when you actually “say it out loud” in public spaces. It’s like a bunch of motivational “search lights” come on when it works.

Thing 1) I’m turning my social dissections of trolls into my lessons on social conflict. I’ve decided that I need to standardize a format so that a reader has some predictability, and so that I can better control how I present things to readers. I’m trying to get more disciplined in what I am writing. Trying to make some predictable structure out of what I did here could be useful.

My next case study (and probably next post) will be about the troll “Yor” at We Hunted the Mammoth. They were quite the name-caller with little to no willingness or ability to back up the things they were typing.  A primary strategy was to switch the nature of the group or person they were arguing about in order to avoid providing substance for their claims (example: criticizing the commentators and blog, and then switching to criticizing feminism/feminists/radical feminists more broadly). They were little more than a dog pissing on a tree.

So far the structure of a dissection will be Intro, a general description of the person acting as a troll (as best as can be determined by the segment of reputation given in the comment), and the conflict involving the troll dissected apart into “rational sub-sections”. A rational section is going to be defined by it’s role in the following conflict.

For examples of “rational sub-sections” the troll’s first comment (1) and the first set of responses (2) have a defining effect on what is to come, a definition that has a lot to do with what I would call tit-for-tat psychology.

The term itself has a negative connotation defined by things like seemingly intractable conflicts among families (the Hatfield and McCoy conflict that spawned references in cartoons), to the social interactions between modern Israel and Palestine. Yet the same process for mirroring situational moral and ethical conduct at a level that includes conscious and unconscious elements, also includes the famous golden rule. The first comments (s) by a troll and the first set of responses are critical when it comes to the social posture that the combatants choose as they form impressions of themselves, one another, and the content of “their comments” from multiple frames of reference.

Things that I consider ethical and moral concerns (3) will also be introduced along with the specific comments in which they apply as well.

Thing 2) I should to do vocabulary/concepts posts, and you can consider this one the first (I’m also now asking myself why I’m not already doing them). I appeal to journal articles a lot in justifying the existence of phenomena and there are things I can do to help readers out. One of those things is to have a list of concepts that can unify a lot of things at the same time and to trickle them out in posts.

My first one is the term [social affordances].

The simple definition of [Affordance] offered at Wikipedia link that is “the possibility of an action on an object or environment”. In an analogy interacting with a video game that would be all the little things that you can do with the game as you interface with it, and the game console/computer running it. Everything from buttons, to movement, to menus, to game in-the moment interaction mechanics from milliseconds to hours and more. The ability to sense and use a system of damaging enemies based on “elemental effects” (fire, water, light, etc…) is an example of an affordance in video games with perceptual and cognitive elements.

Now think about how that concept merges with common experience. I think in terms of Social Affordances a lot. There are variables in how brains make minds associated with the concept. The ability to become aware of a previously unknown social pattern that can be sensed and interacted with is useful. Everyone can claim to have a basic interest in those two words presented as a term. Using this concept forces us to try to be as objective as we can about it.

Thing 3) ^[That]^ gets us to symbology (which I started above). I need to simplify the presentation of complex information in a form that is approachable and challengeable. I’m good at an authoritative voice and I dislike arguments from authority. That requires some creativity on my part in terms of making shit up with what the culture has made available to me. If you think that is farfetched you can #fuckoff (or is that “#youcanfuckoff”?). The following will be a set of equivalences that will be rules for the rest of this blog post.

Whatever I put in brackets is to be considered an object and a social affordance in the remainder of this blog post.

[social affordance] is also useful because I can yank lots of simple concepts from stuff like basic algebra or file structure to represent relationships (three kinds of brackets, lots of possibilities). So what about some [objective examples of social affordances]?

*The ability to detect and use [fallacious reasoning]/[list of logical fallacies]/[fallacy “X”]. For example [Ad Hominem]. The “/” creates a hierarchy structure similar to hard drive file locations here, but it indicates a way of conceptualizing relationships among categories and specifics within a category.

There is a distance between looking up a logical fallacy, and internalizing what it means to see it in a fluid enough manner to deal with one in seconds. On top of that recognizing it in yourself has its own set of challenges that amount to something I think of as “ultimate in-group interference, self” (no square brackets yet because I’m still trying to comfortably define such, but I bet you get what I’m talking about).

The ability to see a pattern in social communication, which is a behavior that you were previously blind to, is the creation of an objective [social affordance]:[fallacy “X”] (you can after all interact with objects). With time you can get more skilled at fallacious reasoning in general. My writing is very much about creating social affordances related to social conflict.

So what are some other things that I would call social affordances?

I’ll end this with a couple of screen grabs from Powerpoint that involve some other ways of symbolically representing things that I’m trying to learn more about and use more fluidly in terms of concepts as they apply to common experience. I like playing with symbols and symbolism as a compulsive habit. 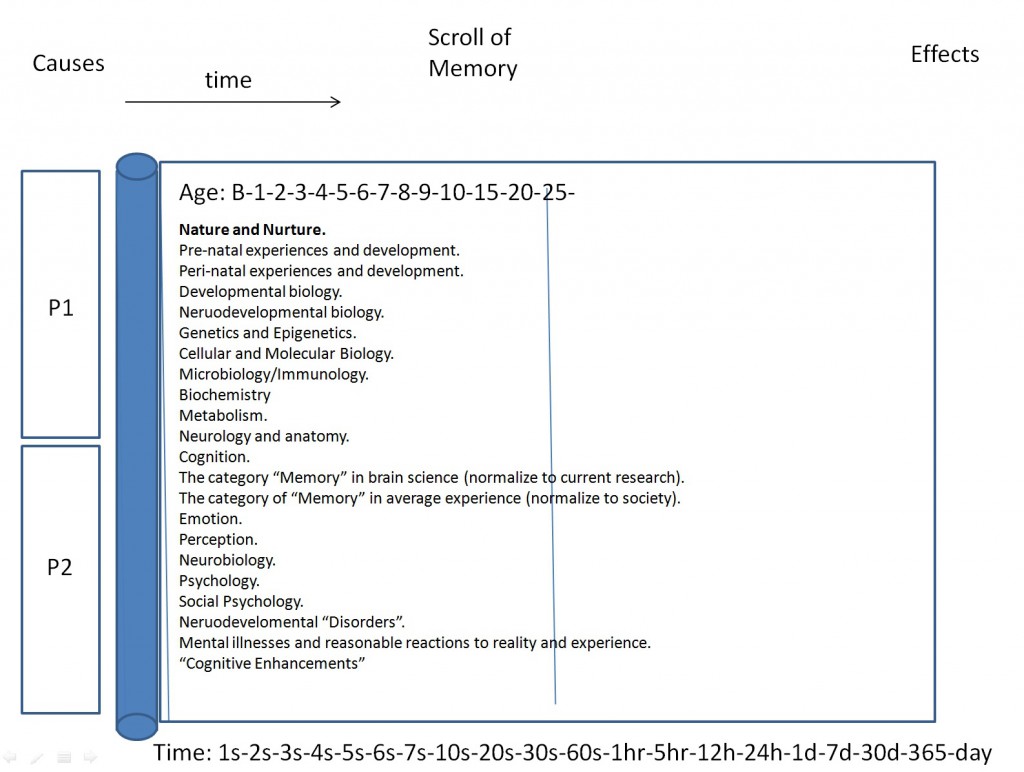 “Memory” is anything that changes you as you move forward in time. But this also allows for things that you inherit genetically and non-genetically that are likely to have significantly biased who you are now. If inherited epigenetic marks are involved in my Tourette’s Syndrome I would consider that a part of Memory, it’s just not my memory alone. 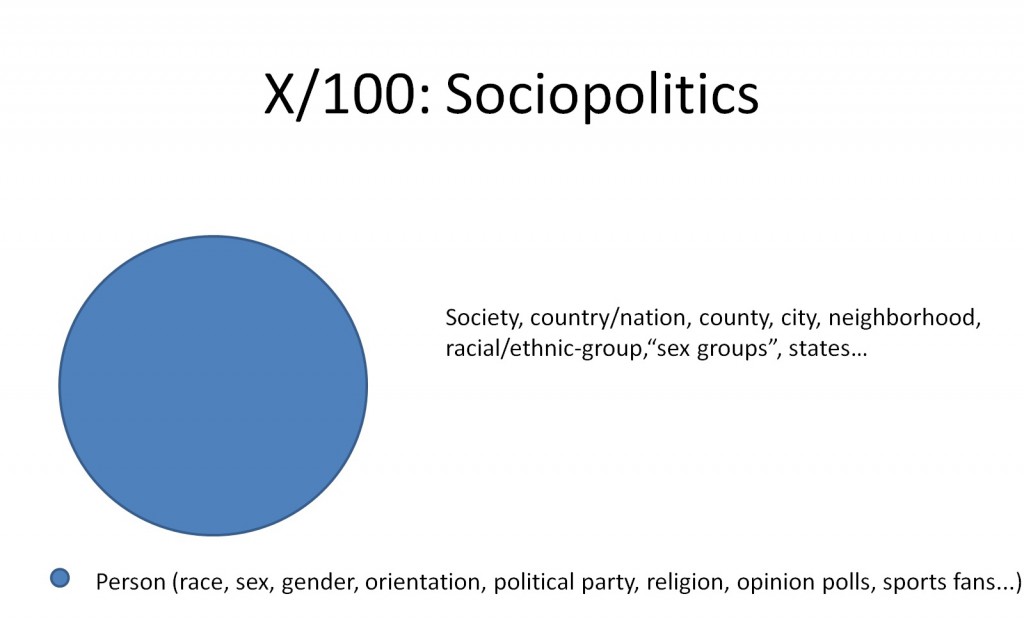 Circles inside of circles. That’s going to be interesting to get right. The proportion of Trump voters that agree with bigoted statements or provide answers to questions that suggest such is a tempting thing to play with. But on the other end I can imagine the mess that the same Trump voters would do with this (the one above too). Fortunately morals and ethics associated with a discussion of group dynamics and structure is also a thing that can be bound to that.