This shit sucks. Kind of sucks. It’s complicated. I can’t even come up with blog rules without things getting complicated. I have a solid outline of my most important creative project sketched out in a way that lets me start building a substantive rough draft, an introduction and lesson one of social conflict and and social media across many things and with an emphasis on the internet. But then I started realizing what I needed in order to actually do a thing like that right. The social atmosphere of this place must be defined.

I need commenting rules because I tend to see that the best educators have a set of social rules that they guide their sessions by. The participants (educator and potential learner) of that session must have the social tools needed to defend their right to that process. In both directions. Not only are there safe spaces, society is  composed of sets of them that interact in different ways. They use different rules for different occasions, processes, functions and other parts of society. New kinds of safe spaces are always being created and others fall into disuse. I have to consider a certain kind of social predator, as a person with socially predatory instincts.

I respect the relationship that everyone with the diagnosis has with their OCD. As a result I note that I do not have a formal diagnosis of OCD. While there are really good reasons for people to avoid self-diagnosis a person can become competent at reading the experiences, research, statistics, anatomy, psychology and other things and get enough of a gist to know what right and wrong looks like. I’m not an expert but I am legitimately obsessed in something that matches the shape of my consciousness very closely.

I see that acronym get socially abused a lot. People say “OCD” when they mean peeve or irritant. I get it, you are bothered by a pattern in your environment. The casual use does have features connected to what I read about when it comes to OCD, but the reality is like a fractured collection of cognitive perceptual sensitivities driven by instinctual processes in the obsession. In the compulsion the habits, rituals and other responses are legitimately reasonable behavioral responses to things that are important in an instinctual sense. But the casual use is ultimately rude, obscures the reality of people with specific patterns in a diagnosis, and is ultimately a weakness of personality. If someone without a diagnosis cannot describe what they are sensitive to in detail and they have reasonably functional reasoning and logic skills, I get to look for clues as to why I should care.

Germs and disease, patterns in your work and living environment, home security, perfectionism, social rules. That last one is mine. There is a little part of my mind that is always humming with a sense of urge. “It” really likes to try to understand why people feel the way that they do about the world, but it has very strict standards. As a result it ceaselessly scans our social environment for information about what people feel most strongly about. When it sees something it blasts its presence into my mind at an intensity that can only be denied for a time. Eventually I have to know what that was all about.

My intersection of TS/ADHD/OCD, you all feel loud but I’m used to it by now.

As a result of this perceptual sensitivity after 39 years I have an array of mental heuristics and routines that I have developed in order to figure out socially intense situations. Anyone can feel free to question them, that’s reasonable and I just assume that people will want to know why I believe what I do about what people do. People in my corner of social OCD are looking for ways of relieving this instinctual tension through expression. It legitimately causes problems often enough for us to create habits that bleed off the tension. When someone forces that sensitivity into obedience through a careful, calculating, euphoric and often excruciating focus it can become a skill.

I test social rules and I have an array of situational rules that I have consciously created over the years. I test social rules mentally at multiple points during the day and I often ask people to clarify important points in brief. It’s a dedicated process in that I take it into conscious account during mental downtime when I am not working or doing something that requires my complete focus. It can get out of control otherwise. I compare, contrast, read the inputs and the outputs. I scan visually and audio-ly, and textually, and linguistically, and in body language, and tone, and in informational content. I test reasoning, I test logic (by many definitions of “logic”), I test consistency with reality, I actively look for inconsistency with reality.

I literally mentally simulate social encounters in a literal virtual social space in my mind’s eye. For fun, and for practice. This was a habit of imagination as a child. I would imagine myself on adventures with the cartoon characters I watched as a kid and use them in my mental social games. It’s has it’s benefits and drawbacks like any other part of human behavior, and as morally strict as I am internally I recognize the intersections between what get called “black and white” and “grey”. Nice metaphors, but limited so I am hyper-literal when I need to be.

Nurture, the life experiences, and choices of people.

Naturally the fact that my social hardware is biased still allows for life experiences and choices to be relevant. For me and everyone else. I am biased. I assume it. I am sensitive to things in a different way than other people. So I error check because I’m human.

Society lies about the word bias. This post about the cognitive bias codex and it’s organization by Iris Vander Pluym is conveniently topical. I’ve seen the same patterns but that reorganization and image in the link wins for presentation and clarity. I have a love-hate relationship with non-literal language but bias is not supposed to feel like non-literal language in how people use it. Bias is not just bad and just saying bias does not mean it is so. One still has to prove that the bias is irrational and corrupts the logic of a belief, argument or experience about the world.

So yeah. I’m biased. If you don’t like my rules and question any of the underlying experiences, reasoning or logic feel free to ask questions. This list of experimental blog rules has motivations and goals. It has underlying assumptions. Just as everyone is biased everyone has an agenda. This is the agenda of a brony who moderated the serious discussion board of the brony-themed image board Ponychan.

It’s five rules, but I’m trying to think of ways to boil the same information down into fewer and more simply stated ones. I’m unsure about the restrictiveness, but I can give a lot of detail about why they are what they are. I condensed this out of a set of 23 problematic social patterns that I actively think about (what I could soak out of my brain during brief moments while at work). I even sketched a model of group-perspective logic in terms of the kinds of basic social spaces that people tend to be sensitive to from my perspective (at the end).

The rules (until they are not good enough or a decent suggestion comes along). 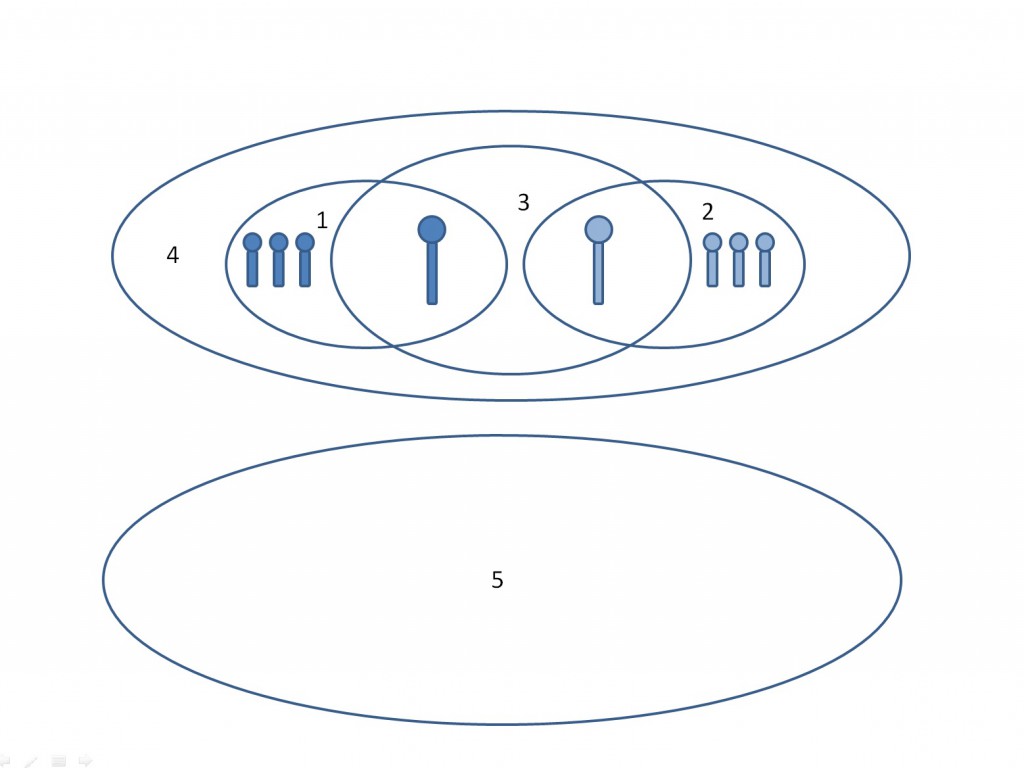 While I’m sure that the reality will be more detailed I tend to see more than one kind of group orientation than simple in-group (1 or 2) or out-group (one or two). 3 is the group made up of you and a single person you are communicating with. Like it or not that is a group with a purpose even if that purpose is to argue about something on the internet. It is in fact likely the original group in several senses. 4 is something that arises when we get to larger group sizes and competition occurs. You still consider one another to be in a group in some sense, but not in others much like the Ds and Rs, and Gs and Is. 5 is the a complete out-group in a definitional sense, but that is effectively how bigots treat other human beings.

If there is any value to this it argues for a system of group perspectives and associated symbolism that we replace the passions of family with clan, tribe, religion, political faction and even sports team.

Hopefully that dumped enough tension to get things going faster. But I still have this nagging feeling that I’m missing something…