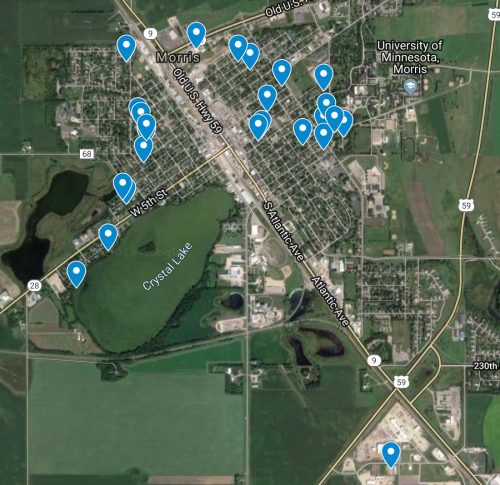 However, the transmission was garbled. What is that 8-legged abomination on the left, with antennae and three tagma? Such a thing would never manifest itself in my dreams.

My bedtime reading lately has been Spiderlight by Adrian Tchaikovsky, which can partly be blamed for my dreams. It’s a fantasy novel, the usual quest to defeat the evil big bad with a party of a priest, a fighter, a rogue, etc. with one significant twist: they recruit (that is, force) a giant spider to join the team, after magically making it sort of a human/spider hybrid so they can talk to it. It’s entertaining. It’s got spiders in it, so of course it’s fun.

I checked on my colony this morning — no news to report. However, Trillian was just being herself, hanging out all relaxed in her web, legs spread out, and so I had to snap a picture.

Spiders do have personalities. Trillian is a casual exhibitionist, happy to sprawl out in her web, while, for instance, Mary Jane is shy and timid, tending to huddle in a corner. Trillian wins on photogenicity, that’s for sure. 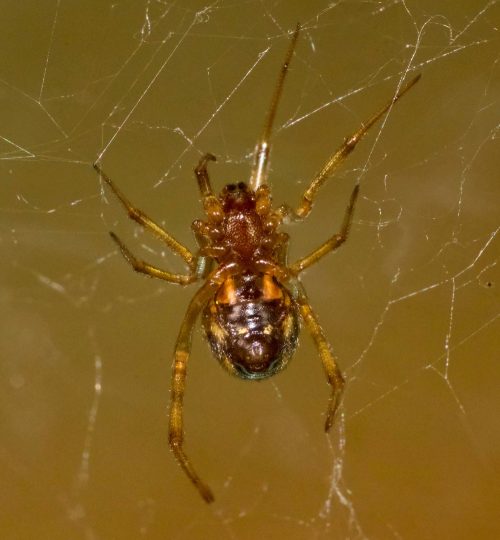 I am currently running into the same problem I encountered last year: male spiders are weak and fragile, and I’m running low on studs. I’ve been shuffling one eager male from cage to cage to service the females, who are all going strong, but there’s a serious lack of depth in the roster. Yesterday, I left this male (males don’t get names, sorry to say) with Rio, a young P. tepidariorum who was barely larger than he was, after two weeks of at least attempted ardor with a sequential collection of lovely ladies. 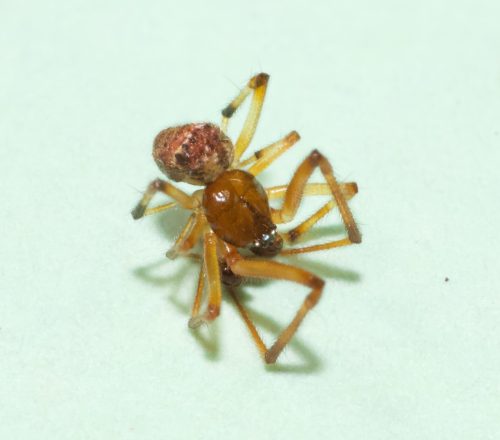 He was not cocooned and sucked dry, so I don’t suspect Rio of murdering him. He was suspended from a drag line in the very center of the cage, curled up and looking cocky, but motionless. I’m going to list “amorous exhaustion” as the cause of death on his death certificate.

I don’t usually name the males — he was previously in a tube with the label “P. tep ♂” — but in his honor, I posthumously name him Mr. Studly.

Another day in the lab, waiting for spiders to hatch out. They keep teasing me. While I was looking for egg sacs, though, this guy stood out. That’s a chonky big Steatoda borealis. 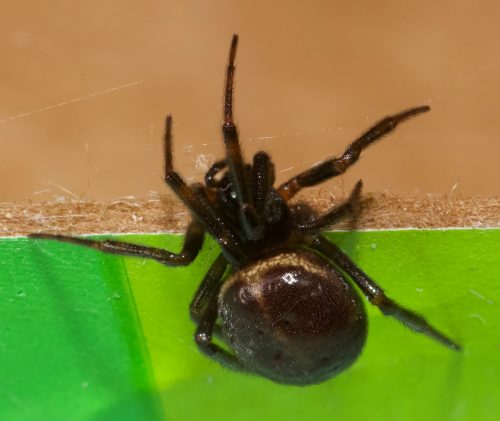 Note the light horizontal band across the front of the abdomen, and the hint of a midline stripe, all against a darkly pigmented body. These are true native spiders, found in the northern US in the midwest and east, and also in Canada. Parasteatoda tepidariorum is, apparently, also native to North and South America, but has spread all around the world, unlike these stay-at-homes.

S. borealis is also more stocky than P. tepidariorum. Here’s the latter to remind you what they look like. 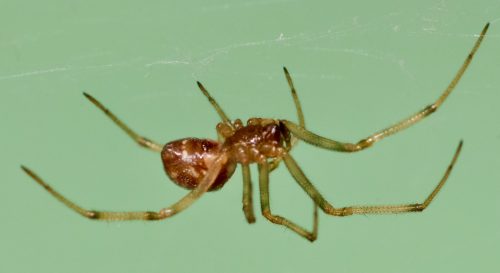 Now I’ve got to wonder what has made S. borealis so well-tuned to these places with snowy winters.

There was something missing from Christmas Tree Mk. I…but today I found the perfect star to put on top. 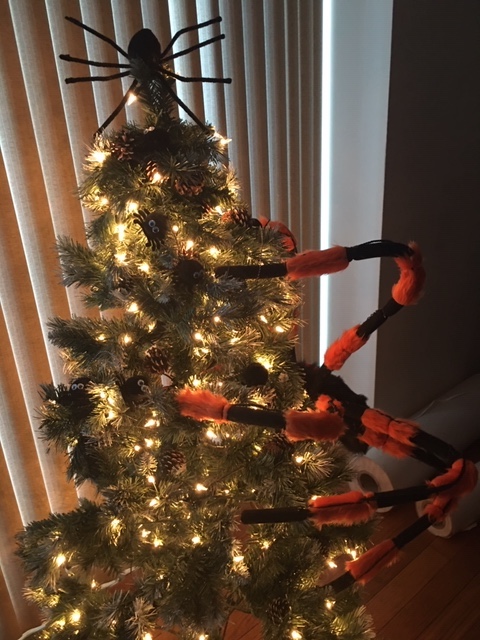 Here in frigid Minnesota, there are only brief windows of time where the weather is suitable for making snowcreatures — most of the time, it’s so cold the snow doesn’t pack well, and it only takes a few minutes of exposure to get frostbite. Lately, though, the comics are all telling me the wonders of playing outside. 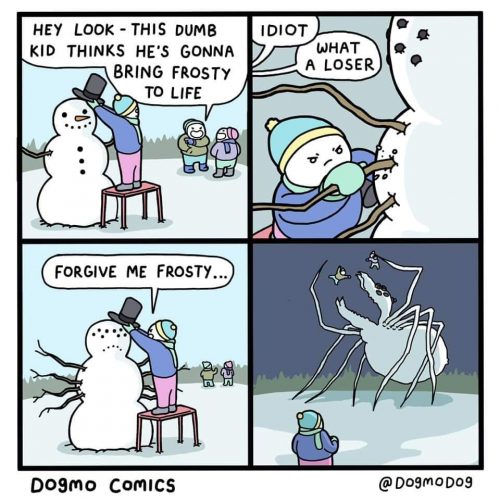 This has to be taking place in some warmer, neo-tropical place, like Iowa.

The spiders were all fed this morning, and I continued my efforts to get breeding to happen. Maybe it did; I’d left the female New Arya (it’s a cursed name, we’ve gone through three Aryas so far, although this one seems to be lasting) with a male over the weekend, and initially I wasn’t certain what was going on. New Arya is slightly peculiar, having built a nest of debris in one corner of her cage, rarely leaving it. When last I left our two lovebirds, the male was hovering about the nest, plucking forlornly at the web, and New Arya was just waving a tootsie at him.

This morning, though, New Arya was outside (she’s on the left) near the male (on the right), and the two were just resting…in post-coital bliss, perhaps? I hope? I didn’t have the heart to break up the peaceful pair today, so I left them alone, for now. That male has more copulatory duties with other females, though, so I’m going to have to break them up this week. 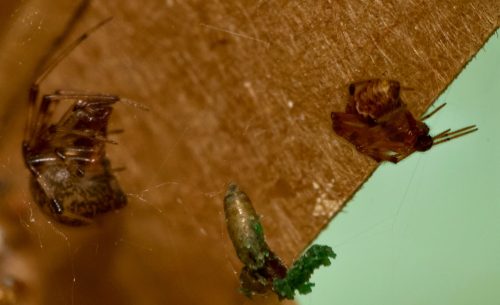 Speaking of nesting, I found Mary Jane huddled in a corner with a dome built over her head. It looks cozy. 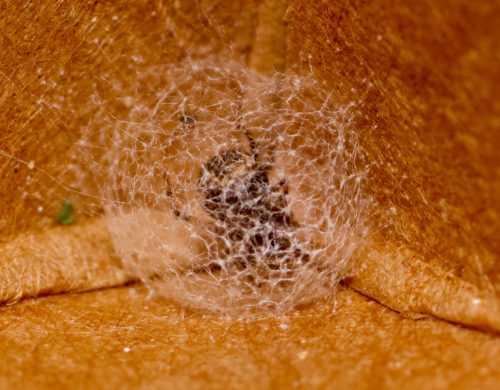 She seems quite content to have a home of her own. I suppose I’m going to have to introduce a male at some point, though, and wreck her maleless paradise. 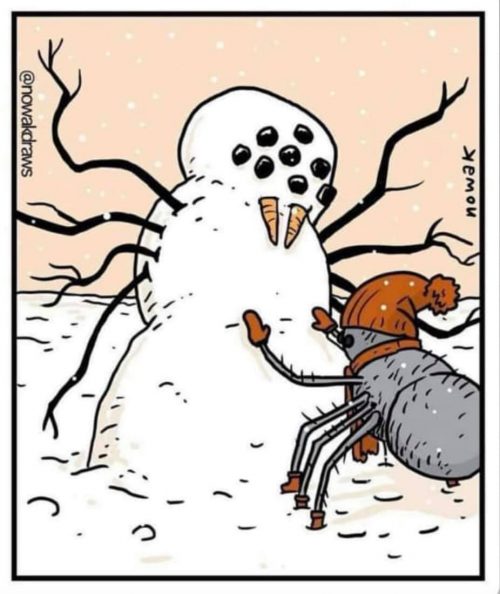 Also, that ocular arrangement is odd.

I get complaints all the time about my spider photos. No matter how gorgeous they are, there are always a bunch of people who dislike seeing them. They’re not cats, you know? Everyone wants cats. Nothing but cats. Adorable little kittens frolicking about.

Well, PZ don’t do that. I’m willing to compromise, though, so here…a non-spider. It’s kind of the antithesis of a spider, which makes it more like a kitty cat. Enjoy your penis worms. 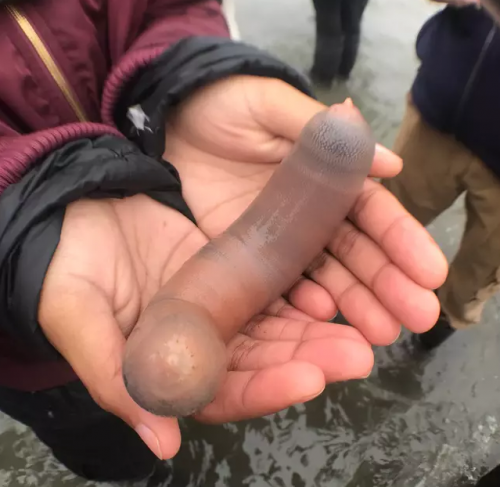 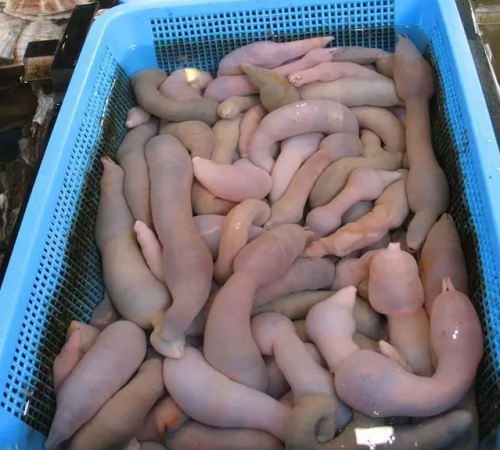 And a beach covered with penis worms. 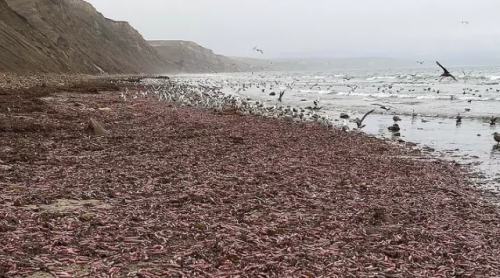 You like that, huh? You want more? ARE YOU HAPPY NOW??!? Are you going to continue criticizing my spiders?