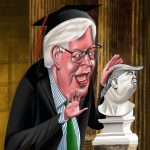 Dennis Prager is unhappy that some of his fans don’t get to see their grown children on Christmas. Tragic.

There are probably hundreds of thousands of men and women who, because of political differences, maintain minimal or no contact with their parents and, even more cruelly, do not allow their parents to have any contact with their children—their parents’ grandchildren.
…
I know of this firsthand. Parent after parent calls my radio show, often close to tears, sometimes actually sobbing, pouring their heart out to me about being alone on holidays despite having children and grandchildren.

In virtually every case, the parent is conservative, and the child is on the Left. I assume there are cases of grown conservative children who won’t allow a liberal/Left parent to see his or her grandchildren—but I have never heard of a single such case. It is almost impossible to imagine a conservative adult depriving his or her parents of access to their grandchildren because the parent(s) voted for Joe Biden. Moreover, if there were such a person, every conservative I know would vociferously condemn this individual.

Awww. Don’t you realize that it is a religious imperative — it’s right there in the Ten Commandments — that you are required to honor your parents, without regard for whether they honor you or not? It’s an absolute rule. Your parents can be hateful bigots, they can have neglected or abused you, they can be preaching prejudiced ideas that do great harm to others, but you must place your children in their claws for Christmas. You have no choice in the matter, nor do your kids, because choice and consent are dirty words to the Pragers of the world. Shall we consider that maybe those sobbing grandparents are deprived of contact with their grandchildren because they are poisonous vipers who want to indoctrinate the kiddies with evil ideas? No, we shall not. The problem lies entirely with those damned liberal parents.

Prager gives three reasons why evil leftists are entirely at fault for making their parents cry.

Reason #1 is basically authoritarian absolutism. Thou shalt not question the orders of the preacher Lord!

The further left you go, the less likely you are to believe that you are accountable to an absolute moral code, let alone to a Giver of an absolute moral code. On the other hand, conservatives, certainly religious conservatives—people who believe in a God-given Ten Commandments—believe that they are obligated to honor their parents regardless of their political differences.

No, we Leftists do have moral values — we just don’t accept the unquestioned authority of a holy book, especially not when it’s a self-serving commandment that panders to the authority of old people, and especially not old people who have made questionable moral decisions. Shouldn’t a universal moral code be one that even people who do not follow a narrow religious sect can accept? “Honor your parents” doesn’t work as a blind precept, because some parents don’t deserve honor.

A parent who endorses the politics of hatred, as Republicans do, should legitimately be disowned. You want to say that gays should be killed, brown people deported, atheists (and anyone who follows a different sect than yours) is evil? Then no, you don’t get to play with my kids. Perfectly fair.

Reason #2 is a strange one, and a good reason to avoid people like Prager: it’s because atheists do not have a conscience and are evil, and that’s why they make Grandma cry.

The Left proves the utter inadequacy of the conscience. To cite the present example, the adult children who deprive their conservative parents of contact with the parents’ grandchildren have a perfectly clear conscience. All those secular people—including secular conservatives—who argue that God is unnecessary because it is enough for people to answer to their conscience are spectacularly naïve. The consciences of most people who do evil are blissfully untroubled.

They don’t even care that they are making their parents unhappy! To the contrary, if I’d had to cut off my parents’ access to my kids, I’d have felt terrible about it, and would have suffered pangs of guilt (fortunately, that was never a problem in my family, and I wish my kids could have spent more time with their grandparents). The reason someone may sever communication with a parent is precisely because they have a conscience and a set of moral values that find the ideas of an older generation repugnant.

Reason #3 is even stranger and more absurd. It’s college. Conservatives really have a hate-on for education.

No, what happens is that kids escape their parents’ control, and learn that Mommy & Daddy’s moral and religious code isn’t the only one out there — they learn to think for themselves and discover that there is a world of ideas that aren’t as blinkered and narrow and oppressive. They might just wake up to the fact that the gay-bashing and transphobia and racism and greed they were brought up with are bad ideas. They may even still love their parents, but just regret how they treat others, and not want their own children to have that kind of bias instilled in them.

It’s not that the more liberal offspring are the problem. It’s the nasty opinionated hidebound kinds of people who would call in to cry on the shoulders of a conservative wretch like Dennis Prager who are terrible role models for anyone’s kids.

Quaintly evil » « Hey, NASA, how about renaming the JWST?