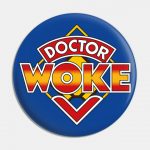 What do you get when a gang of far-right loons gather together to complain about modern medicine? An amazingly revealing expose of what actually bothers them. This essay, In Medical Schools, Woke Ideology Trumps True Healthcare, is a summary of a discussion sponsored by the James G. Martin Center for Academic Renewal, a far right conservative/libertarian organization that tries to tell universities what they ought to do, and they hosted a little group of conservative nuisances to whine about medical schools.

The webinar, entitled “Hypocritical Oath: The Origins and Consequences of Woke Medical Education,” featured Dr. Sally Satel, a practicing psychiatrist, lecturer at the Yale University School of Medicine, and Senior Fellow at the American Enterprise Institute [enough said]; Aaron Sibarium, associate editor at the Washington Free Beacon [a conservative website founded by a billionaire hedge fund investor]; and John Sailer, a research associate at the National Association of Scholars [I’ve written about these clowns before] and author of numerous articles on “diversity, equity, and inclusion” (DEI) in medical education.

Oh, no! Not the “Wokes” again! Perhaps they’ll start out by defining what they mean by “woke”.

Satel began the talk by speaking about how woke ideology has taken over psychiatric care. She stated, “any kind of psychotherapy that takes place under such conditions, where patients are reflexively branded as oppressed and encouraged to see themselves as feeble victims, is doomed to fail.” She made the point that therapy is meant to help individuals identify the inadvertent ways in which they undermine their best interests and how they can adapt if they are unable to change. To be sure, one’s health can be affected by social factors—but not exclusively. There are other factors that impact health, despite the new social doctrine of the day.

No, that’s not what it means. I agree that any psychotherapy that reflexively branded as oppressed and encouraged to see themselves as feeble victims their patients is going to fail, but that’s not what goes on. Can you imagine trying to motivate a mass movement under the banner of “YOU’RE ALL FEEBLE VICTIMS!” Sorry, nope, being conscious of oppressive social systems is not the same as accepting victimhood.

She also parrots the conservative/libertarian line about personal responsibility.

The choices one makes on a daily basis, for example, have long-term effects on health. Satel highlighted an often ignored fact: individuals, no matter their circumstances, still have some agency when it comes to their own health. Unfortunately, the concept of individual agency has slowly withered away, replaced by the far more popular victimhood ideology. In today’s victimhood society, it is almost unthinkable to take responsibility for one’s actions and the possible negative effects they may have.

Sailer spoke next about how institutional policy has resulted in woke medical schools. He noted that UNC-Chapel Hill has twenty-four paid DEI officers, and half of these officers are in fields related to healthcare (12), and a majority of those are in the medical school (8). The university, as a result, has convened a task force to integrate social justice into the curriculum. Sailer says these kinds of policies and task forces are present on almost all medical campuses in the country.

DEI and social justice, for example, are now a part of the tenure and promotion process at many medical schools. This means that if one objects to the politically correct idea of the day, one’s job as a professor may be in jeopardy. Objective truths such as, “a man is a man, and a woman is a woman,” may now cause faculty to lose their jobs.

Whoa there, John. You forgot to tell us why diversity and equality and social justice are bad things for doctors to learn about. Why shouldn’t we expect a doctor to care about the health and welfare of their patients? Shouldn’t doctors oppose unhealthy working and living conditions?

Also, you’re being sneaky and dishonest, John. a man is a man, and a woman is a woman is only an objective truth if you’ve clearly defined what you mean by the complex terms “woman” and “man”, and I suspect you’re trying to smuggle in some bigotry.

Sailer also spoke about the White Coats for Black Lives group and its beliefs. Its members believe in a variety of radical notions including, but not limited to: dismantling fatphobia, abolishing prisons, dismantling capitalism, and queer/trans liberation. What is remarkable is the effectiveness with which this radical group has enacted concrete policy changes, including at the University of Michigan, the University of California-Davis, the University of Minnesota, and many others.

Yes? Again, what is your objection to dismantling fatphobia? Do you think we should build more prisons? Do you fail to see the glaring flaws in capitalism? What do you want, queer/trans imprisonment? Sailer is simply taking for granted that his audience opposes these things that humane people with the goal of making the world better are trying to implement. Just like his “a man is a man” statement is just a call for bigots to fill in the blanks.

I look at the list of things these anti-“wokists” oppose, and they all look like fine ideas to me, and they always fail to explain why they’re agin’ ’em. What’s wrong with queer/trans liberation? What are they afraid will happen if queer people have equal rights and autonomy and are protected from discrimination and hate? It’s the unspoken stuff behind their words that is most revealing.

Please, medical schools, continue to make it a priority to train doctors to be ethical human beings who respect the existence of others. That’s what “woke” really means, you know.