Russian troops are retreating from the area around Kiev, and leaving behind the wreckage of war. The recently liberated town of Bucha is an example: dead civilians left in the streets, some bound up and shot. The survivors have horror stories about the brutal occupation. There are mass graves. The Russians have abandoned any pretense of civilized behavior.

The horrific scenes from #Bucha reinforce the contents of this piece. ICC & others will investigate, but Russian commanders were negligent, ethically corrupt & criminal. Bucha shows the Russian Army is not ‘professional’ nor do they deserve the term ‘soldiers’. 1/14 https://t.co/50NUjTGMVA

At least there are also signs that the Russian invasion cost the invaders heavily, too. 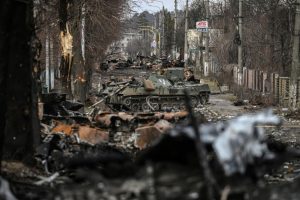 Is there any hope for the police? » « Matt Powell is a bag of misconceptions & lies