Schisms are so confusing. There is this thing called the Independent Fundamental Baptist Movement, which I always thought was on the dangerously loony side of Christianity, but it turns out it wasn’t mad enough for some people, so they founded something called the New Independent Fundamental Baptist Movement, which is even worse. It’s led by Steven Anderson, known hate-monger, and is characterized by extreme anti-LGBT sentiment and anti-Semitism. These are the worst of the worst, the rotting dregs of Christianity. Greg Locke, who recently made news with his announcements about witches in his congregation, doesn’t seem to be NIFB, but he did break away from the Southern Baptist Convention to form his own schismatic group, and I don’t see much difference between Anderson and Locke.

But you know who is NIFB? Matt Powell.

He seems such a nice, baby-faced boy, you say. He’s definitely not very bright, but he couldn’t possible be one of them. Yeah, he is. It’s easy to forget that he has been calling for the execution of LGBT people. I just stumbled across this video of Powell haranguing a member of his congregation a few years ago, shouting, screaming, saying he is “acting like a woman”, gaslighting him, accusing him of betrayal, telling him he’s going to Hell. It’s extremely unpleasant, but mercifully a very short clip.

That has me wondering. I’ve seen a lot of speculation that Powell is throwing his life away by tying himself to Kent Hovind, that Hovind is exploiting his young acolyte. But Hovind is theologically extremely naive, not at all a deep thinker, somebody who is cartoonishly shallow. What if we’ve got it backwards? What if Powell is the serpent, the devious Sith who plans to drag Hovind further towards the Dark Side, inoculating him with even more extremist seeds of hate?

Sure, you can joke about Matt Powell keeping a giant inflatable banana in his backyard, but don’t let it distract you from the fact that he’s a pathetic hate-filled rage beast, and isn’t funny at all. 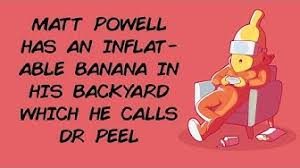