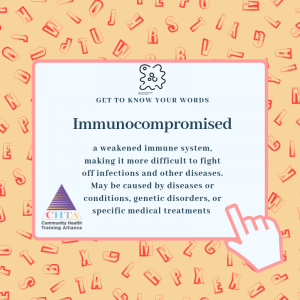 Read Ed Yong. He’s explaining how 3% of the country — 7 million people — are immunocompromised for various causes, and vaccine and mask resistance (and outright denial) are putting them at risk. We seem to have just written them all off.

Finding and keeping jobs can be very hard for people with chronic illnesses such as lupus, which can leave them feeling powerless to advocate for themselves. With “close to no say about your working conditions, you can only do so much to protect yourself,” Levantovskaya, the literature professor, said. Several immunocompromised people have been told that they’re holding the rest of society back. In fact, it is the opposite: They’re being forced to reintegrate with no regard for their residual risk.

And perhaps worst of all, immunocompromised people began to be outright dismissed by their friends, relatives, and colleagues because of the misleading narrative that Omicron is mild. The variant bypassed some of the defenses that even immunocompetent people had built up, rendered several antibody treatments ineffective, and swamped the health-care system that immunocompromised people rely on. And yet one of Wallace’s patients was told by their sister that no one is dying anymore. In fact, people are still dying, and immunocompromised people disproportionately so. Ignoring that sends an implicit message: Your lives don’t matter.

The pandemic is not over, despite people insisting they’re done with COVID. COVID’s not done with us.

Meanwhile, over on the Washington Post, they dedicate a long article to Chris Crouch. “Who?” you might ask. I did. Reading the article didn’t help explain why he gets all the attention. He and his wife Diana were deniers.

When the vaccines came along, Chris became outspoken against them, espousing views that were common in his workplace and much of Texas but that put him at odds with his mother, sister and the close friends he had grown up with in the Heights, a liberal bastion in Houston. Despite his family’s pleading, Chris and Diana were adamant they did not need to be vaccinated. They did wear masks, but only when required.

Chris felt that vaccine mandates infringed on personal liberties, a perspective promoted by Texas Gov. Greg Abbott and other prominent Republicans. And Chris and Diana also worried that the shots had been developed too quickly. As he liked to say, “God gave us our immune system and we can fight the viruses with our own immune system.” Diana, meanwhile, was leery of anything that might hurt the developing baby she carried. She knew that early stories linking the vaccines to miscarriage and infertility were false, but thought avoiding them was the prudent thing to do, like skipping wine, raw fish and unpasteurized cheese — especially given some of the medical community’s early hesitation. The World Health Organization and the U.S. Centers for Disease Control and Prevention now recommend that all pregnant people get vaccinated.

So…stupid asshole with the usual array of bogus arguments.

But then, it turns out that pregnancy is one of those complicating factors for COVID-19. Diana came down with a savage case, spends months on a ventilator and in a coma, has a series of small strokes, her lung collapses, the doctors expect that her chances of survival are very, very low, and that the pregnancy was a seriously debilitating factor.

Chris Crouch decides “he had to try to save them both.” That was a jarring statement. HE is going to save his wife and the fetus? I don’t know that there is much he could do, and further, his wife was unconscious and on a ventilator, the doctors and nurses were doing all the work. I guess he alone decided that he would maintain the elevated risk for his wife. If I were in a similar situation, I’d have instantly made a different choice, but ultimately would have wanted my wife’s opinion. It’s her body, her life, the husband is not the one suffering and close to dying.

Oh no! Pity poor Chris Crouch! Then he has a revelation.

During those long hours alone, he struggled with how strongly he had held to beliefs about the vaccines without really examining them. Increasingly, he felt a responsibility to warn others about his mistakes, so he began writing to friends, family and even strangers on Facebook, urging them to get the shots. Somewhere along the way, he got vaccinated himself.

“When you sit there and you see your wife on life support because of covid, you throw out politics,” he said later. “None of that matters anymore.”

Jesus christ. Almost a million dead in the US alone, with doctors and scientists telling you all along that this was a serious disease and that precautions are necessary, and now, at the last minute, when one person close to you is dying of the disease you belittle, NOW you decide maybe you could have been wrong, and that you shouldn’t have let your politics wreck public health policy. You dumbass. You goddamn selfish, self-centered, poisonous little asshole.

Then, the icing on the cake: Chris Crouch gets a whole long story in the Washington Post, entirely centered on him, on his struggle, his encounter with COVID, his difficult months watching his wife wasting away in a hospital bed, his wrestling with his conscience. It’s all him, him, him, him.

His wife survived. Her baby survived, delivered by C-section in the midst of her suffering. Why wasn’t she the heart of this story? Fuck Chris Crouch. He’s one of the reasons COVID has been as crippling and deadly as it has been, and I am totally out of patience and sympathy with his kind.

She’s made of iron » « Can Levar Burton be my hero?