I have long held reservations about the Satanic Temple. I am not at all keen on replacing one Christian superstition with another Christian superstition, even if the satanist are saying they don’t believe in any supernatural entities. It’s just an attention-getting hook, they say. I could see the argument that they are acting as a counterpoise to all those Good News Clubs that are infiltrating the public schools, or as a way to highlight the absurdity of religious teachings.

But are they really?

I have my doubts. Especially after reading this long expose of the Satanic Temple’s history. It begins to look like one guy’s marketing scam. They charter an insignificant few “After School Satan” clubs, they trigger hysterical shrieking from local pastors, they get in the newspapers and on local television news, Tucker Carlson invites Lucien Greaves onto his program, mission accomplished, the clubs are neglected and fall apart.

As late as September 2020, the Temple claimed to have active ASS clubs in nine school districts. A person searching for themselves to double-check could even find multiple national and local headlines about it:

What you may notice (but journalists and fact-checkers never seem to) is that those stories don’t include the clubs getting to the point of actually meeting with students. 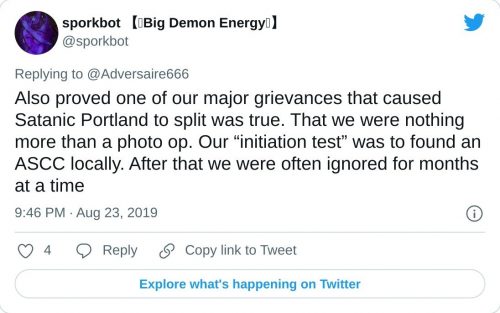 This is a good summary of the pseudo-religion.

What an awful, pathetic religion Satanism is if it wants to get national headlines, untraceable money, and the right to teach children but is too craven to even manage that.

Do we even need to get into Lucien Greaves’ sordid history of anti-semitism, racism, eugenics, and pandering to the far right?