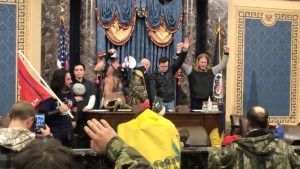 What’s the difference between the insurrectionist’s prayer and the national prayer breakfast? Nothing.

It’s an unfortunately under-reported fact that our recent attempted insurrection had a strong unifying force: White Christian Nationalism. You didn’t see many atheists or Muslims or Jews storming the capitol, and you didn’t hear a lot of non-Christian rhetoric stirring up the mob. The organizations that promote the overthrow of the government are groups like the Proud Boys, the Oathkeepers, the Groypers, etc., all fanatically Christian…or at least, eager to adopt a Christian facade to rationalize their violence.

Speaking to reporters on Wednesday, Seidel highlighted what he called the preponderance of “openly militant” rhetoric that conflated religion and violence. He pointed to William McCall Calhoun Jr., a Georgia lawyer who reportedly claimed on social media that he was among those who “kicked in Nancy Pelosi’s office door” on Jan. 6. (Calhoun later claimed in an interview with the Atlanta Journal Constitution that he did not personally enter any office.)

“God is on Trump’s side. God is not on the Democrats’ side,” Calhoun allegedly wrote in a social media post. “And if patriots have to kill 60 million of these communists, it is God’s will. Think ethnic cleansing but it’s anti-communist cleansing.”

In the report, Seidel recounts a conversation with New Yorker journalist Luke Mogelson, who recorded widely shared footage of insurrectionists attacking the U.S. Capitol and praying in the Senate chamber.

“The Christianity was one of the surprises to me in covering this stuff, and it has been hugely underestimated,” Mogelson told Seidel. “That Christian nationalism you talk about is the driving force and also the unifying force of these disparate players. It’s really Christianity that ties it all together.”

How can it be a surprise? This combination of Christianity and fascism has been openly on display for at least the last century. Here are a few ancient history quotes (ancient only because this is America, we forget the past as soon as it is behind us):

No wonder Jackson said that “Patriotism is the last refuge of scoundrels.” He had the Wall Street gentry in mind or their prototypes, at least; for in every age it has been the tyrant, who has wrapped himself in the cloak of patriotism, or religion, or both. (Shouts of “Good, good” from the crowd) (applause).

“The Ku Klux Klan comes wrapped in the American flag, as it were, advocating the American principles openly, with a Bible in its hand, and the very next day they are passing their neighbors with a mask over their faces. My conception of the fundamental principles of Americanism is that a man should have nothing to be ashamed of.”

A letter to the Kingsport, Tennessee Times:

The contention of my articles will be that, if and when fascism comes over America, it will be on the Kingsport plan—iron hand encased in a silk glove:

For God and Country!
Freedom and democracy!
Pure Anglo-Saxonism!
Liberty and the constitution!

—catchwords which will thwart the actual and real rights of the citizenry . . .

And this familiar quote:

In his book, “It Can’t Happen Here” (1935), Sinclair Lewis wrote, “When fascism comes to America, it will be wrapped in a flag and carrying the cross.”

I repeat, how can this be a surprise? They are talking about a report written by a committee which included Kathryn Stewart, who has a new book, The Power Worshippers, which is specifically about the rise of religious nationalism.

Christian nationalism is a political ideology that ties the ideas of America to specific cultural and religious identities. It’s an anti-democratic ideology because it says the foundation of legitimate government is not our Constitution, our democratic system of governance or our imperfect history of absorbing different people from all over the world into pluralistic society — but rather, our government is tied to specific cultural and religious identities. It’s also a device for mobilizing and often manipulating large segments of the American public.

Man, I wish we had an active atheist movement that wasn’t tainted by authoritarianism and bigotry. I also wish we didn’t have such deep economic rifts that allowed Christian billionaires to astroturf our media and various organizations with fascist assholes like Charlie Kirk and Tucker Carlson.

Kids, you’re our only hope » « Trying to figure out what is going on in Ukraine