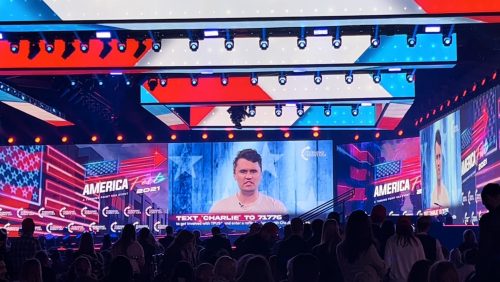 Lasciate ogni speranza, voi ch’entrate should have been inscribed on the exit doors of the Phoenix airport. Tremble and weep in horror at this thorough description of the Turning Point USA conference.

‘Twas the weekend before Christmas when Charlie Kirk and Turning Point USA hosted a massive, sold-out 4-day conservative youth conference featuring 10,000 teens and young adults screaming for Dennis Prager, the Fox News lineup, January 6-plotting politicians, a dancing James O’Keefe, and former active shooter Kyle Rittenhouse in Phoenix, AZ. AmericaFest was located in the same building where Arizona holds it’s yearly ComicCon and the layout was eerily similar. It featured an exhibitor hall filled with merch booths and meet-n-greets, except instead of getting a picture with Spider-Man one could get a picture with Jack “Pizzagate” Posobiec or accused child trafficker Rep. Matt Gaetz. Instead of buying an overpriced Street Fighter figurine, you could buy an $500 bedazzled gun purse or “invest” in Let’s Go Brandon cryptocurrency. Tickets for this mega conference reached up to $750, with people flying in from all over the country to see their favorite TPUSA-sponsored influencer preaching the benefits of white Christian American hypercapitalism. Hotels in the nearby area offered package deals so the entire downtown area was overrun with 20-somethings in blue and hot pink tailored suits and Trump hats for the entire long weekend.

Hate is as popular as comic books, I guess. You couldn’t pay me to set foot in that hall.

Religion, and more specifically Christian supremacy, was present throughout the weekend. Lining the street leading up to the conference, men with graphic anti-choice signs handed out pamphlets for AbortionNO. Turning Point Faith was a co-sponsor of the conference and had a large booth with free merch advocating for the merging of politics and religion, speeches throughout the weekend often spread a similar message. Creepy fetus dolls were on display and fetal development commercials played in between speakers, followed by “BUY GOLD! BUY SILVER!” Anti-choice activist Abby Johnson was a speaker, hosted panels on “how to fight abortion,” and also had a massive merch booth for her “Pro-Love Ministries.” Johnson has previously advocated for “household voting” where only the husband can vote and said that it would be “smart” for the police to racially profile her biracial son. Give Send Go, the Christian supremacist crowdfunding site that platforms white nationalists and other extremist groups also had a merch and prayer booth while the co-founder Jacob Wells joined a reception across the street with an organization with ties to neo-Nazis (more on that later).

Has white nationalism infected religion, or is religion tainting white nationalism? I can’t tell anymore. They’ve long been entangled, and this is just the emergence of a particularly virulent mutant strain of both.

Similar brochures were given out on “gender identity” but explicit transphobia was an ongoing theme from many of the speakers as well. Charlie Kirk took the stage multiple times during his event and demonizing trans people was one of his most repeated points. Dennis Prager lead the crowd in booing trans athletes and he rejected the term “transphobic” entirely, claiming it’s a “meaningless phrase,” implying that trans men, women, and nonbinary people do not exist at all. The one transgender joke conservatives have was repeated countless times this weekend. Nothing can truly describe the pure hate in the crowd any time trans people were mentioned. There were 10,000 young adults frothing at the mouth and scapegoating a tiny and extremely marginalized community for all of their perceived problems.

I truly cannot describe how endlessly transphobic this morning has been so far. Charlie Kirk barely let Sarah Palin speak and instead used the hour to demonize trans people in absolutely every disgusting way possible. (cw) pic.twitter.com/kqgNQz4IWp

Horrible as that was, I’m going to have to nominate the Rittenhouse moment as the low point of the event.

Day three of the convention was noticeably the busiest despite being on a Monday. Charlie Kirk endlessly bragged about how the arena, capable of seating up to 10,000 was filled to capacity. Kyle Rittenhouse was going to take the stage and his appearance was the already the topic of conversation all weekend. The day before, in the snack line, I listened to two teenagers who were giddy in excitement over seeing Rittenhouse, talking about his recent appearance on Louder With Crowder. Rep. Lauren Boebert swooned over Rittenhouse during her speech and later appeared in a photo with him backstage. He was billed as “a VERY special guest” alongside Jack Posobiec, Drew Hernandez, and Elijah Schaffer. Before walking out, the three large screens played scenes from Tucker Carlson’s special on Rittenhouse. The crowd stood to attention and cheered as Kyle appeared on screen then booed and laughed when his victims, Joseph Rosenbaum, Anthony Huber, and Gaige Grosskreutz came on, including the graphic images of their death and injuries. The clip of Rittenhouse crying on the stand was met with shouts of “we love you Kyle!” He took the stage to flashes of red, white, and blue filling the room as a Kyle Rittenhouse-themed rap song blasted. The screaming was deafening as they chanted his name. A young teenager behind me couldn’t stop repeating “based, based, based.”

They showed gory images of the dead and wounded…and the audience laughed about it? Jesus. There’s a crop of young men and women I don’t want to ever meet.

Is this America? Or is this Hell?