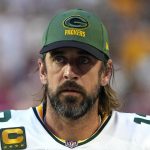 I haven’t been following this Aaron Rodgers story much at all — he’s one among so many idiots who don’t know a thing about biology or medicine, but are so arrogant that they’ll pontificate foolishly about it and end up killing people. In this case, he’s a rich, overpaid, poorly educated professional athlete, and I confess, I find it easy to dismiss him as just a big dumb jock.

And then Kareem Abdul-Jabbar rises up and demonstrates that my stereotypes are false, delivering a well-informed smackdown to the stupid football player.

Unfortunately, the pandemic has revealed several athletes who abuse their position and responsibility, not just to the public, but to other professional athletes’ livelihood.

That latest egregious abuser is Green Bay quarterback and three-time MVP Aaron Rodgers who directly and deliberately lied to fans and the public when he assured everyone he was “immunized,” knowing that word would be interpreted as his being vaccinated. He wasn’t vaccinated. And he got COVID-19. And he went maskless during in-person press conferences, which not only violated NFL rules, but put everyone else’s health at risk.

Instead of consulting immunologists, he consulted anti-vaxxer and podcast host Joe Rogan, who also contracted the virus. If he ever requires open-heart surgery will he hand the scalpel to romance writers because they know about matters of the heart? While many who came into contact with him thought he was vaccinated, Rodgers had embarked on his own regimen to boost his “natural immunity.” He failed, as any scientist could have told him—and as they have been publicly telling us for over a year. University of Michigan microbiologist Ariangela Kozik explained that achieving “natural immunity” through these homeopathic methods is a non-starter because vaccines inform our immune system what the virus looks like so the body can build its own protection.

Joe Rogan…now there’s the type specimen of the big dumb jock. Abdul-Jabbar references that to point out that, obviously, some big jocks aren’t that dumb.

Rodgers’ ignorance regarding the science of immunology brings back to life the old stereotype of the big dumb jock. His utter lack of even the most basic knowledge and logic is shocking. In an effort to defend his lying, he stated, “This idea that it’s a pandemic of the unvaccinated, it’s just a total lie … If the vaccine is so great, then how come people are still getting covid and spreading covid and, unfortunately dying of covid?” Those two statements don’t even belong together. Statistics from many sources conclude that around 97 percent of those being hospitalized or who have died in the past several months are unvaccinated. The CDC found that the unvaccinated are 11 times more likely to die than those vaccinated. If he thinks that’s a lie, what credible evidence does he have? None.

And then — I did not know that Rodgers had been whining about “cancel culture” and the “woke mob”, but I am unsurprised. As always, though, the ones who whimper the most about being “canceled” never seem to face any real material consequences, they’re just bawling over their inanity being exposed.

Rodgers complained that the “cancel culture” was coming for him, but his own words cancel him as a liar and a bad thinker. If he had a principled objection to the vaccine, he could have chosen not to play, like Kyrie Irving, who at least is honest. What really sacked his whining stance was his refusal to wear a mask during interviews to protect others from sickness and death. That was merely his hubris and arrogance against what he called the “woke mob.” In this case, woke means compassion and responsibility toward others. He might also remember that the only reason he is able to play in front of crowds again is because all those suckers got vaccinated.

What will happen to Aaron Rodgers? Other than the brief suspension probably very little. He’s a valuable asset to a multi-billion dollar industry. The deal he signed with the Packers in 2018 is worth $134 million, plus the $9 million for commercial endorsements such as the one he has with Adidas, State Farm Insurance, and others. He has lost one endorsement: Prevea Health, a health care provider, cancelled their contract because his actions were contrary to their commitment to encourage vaccines to end the pandemic. When Rodgers signed with the company in 2019, Dr. Ashok Rai, president and CEO of Prevea, remarked at the time, “As one of the most respected athletes in the country, Aaron is truly passionate about improving the health and wellness of our communities.” That, too, turned out not to be true.

I can’t help but think of Colin Kaepernick, who was blacklisted by the NFL for passively expressing his frustration with systemic racism—a brave act meant to help his community and save lives—while multi-millionaire Rodgers will continue to play, despite lying to the fans and his teammates and putting innocent lives in danger. Time will tell whether Rodgers will be judged by the content of his character or the strength of his throwing arm.

I’m going to guess that the content of his character has just become a more valuable asset to the regressives.

For once, I’m siding with the engineers » « Circadian rhythms are amazing