Anyone in Dallas today? There is a small crowd of wackaloons gathering at AT&T Discovery Plaza to await the resurrection, the second coming, the beginning of a new era. It’s not Jesus Christ they eagerly await, though — it’s John F. Kennedy Jr..

There is currently a large crowd of what appears to be QAnon believers at the AT&T Discovery Plaza in downtown Dallas. A popular QAnon theory recently is that JFK Jr. of the Kennedy family will be making a big announcement at Dealey Plaza by the grassy knoll sometime tomorrow. pic.twitter.com/8L0Lw09wH7

JFK Jr died in a plane crash at sea in 1999. His decomposing body and that of his two passengers were recovered after 5 days of decay and marine scavengers had been at him. I don’t think he survived.

QAnon followers have gathered in Dallas, Texas, where they believe John F. Kennedy Jr. will reappear and announce Donald Trump is president.

A large crowd of QAnon believers descended on the AT&T Discovery Plaza on Monday, ahead of the supposed return of the deceased JFK Jr. before midnight today.

Right, “dozens”. I think we’re seeing the fringe of the fringe.

Conspiracy followers also believe the clocks will go back an hour, that people will adopt the Julian calendar and that the date will go back to October 20.

The QAnon conspiracy, which originated on online message boards, holds that an elite global cabal of Satanic pedophiles is engaged in mass child sex trafficking and that, somehow, former President Donald Trump will expose this group and order its members arrested and sentenced to death.

They are sort of right about one thing: the clocks will be set back an hour next Sunday. The rest? I don’t think so.

But there is a section of the QAnon conspiracy movement that has also latched onto the belief that John F. Kennedy Jr. will reveal he did not die in a plane crash in 1999 and will help usher in a new period of American prosperity.

The outlandish theory posits that JFK Jr. has been in hiding for more than two decades and would return as Trump’s vice president.

A popular QAnon Telegram account with more than 100,000 subscribers echoed the conspiracy in a Monday post and said Trump would be reinstated as president and JFK Jr. would be named his vice president.

The post continued to claim Trump would then step down, meaning JFK Jr. would become president and name Michael Flynn as his vice president.

It continued to push a messianic narrative, with the post adding Trump would “most likely” become king of kings, failing to elaborate on what that would entail.

Their iconography is amazing. 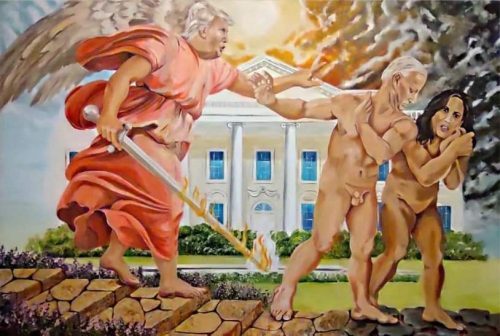 By the way, I found that image, and many more, in a “Donald Trump is Jesus” group on Facebook, which is still a major vector for spreading bullshit, like anti-vaccination memes.

Forgive me, for I have sinned » « Time to walk the walk, Leslie