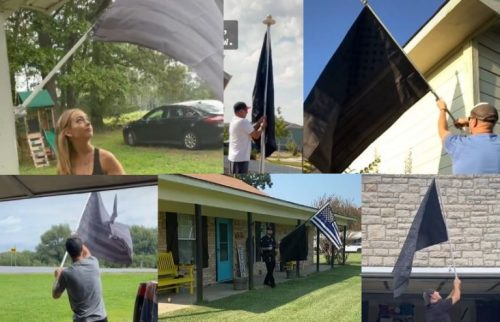 But I wouldn’t put it past some of the other locals. It seems some of our far-right Trumpkin Americans are blustering on Tik-Tok about rising up and murdering the libs, bragging about putting up black flags as a sign of no quarter given (I think they’re usually accustomed to flying white flags). Their reasoning, though, is bizarre.

So, we’re the enemy, and they’re openly professing to want to execute us… So, why are they doing this?

Covid vaccinations, mostly. They believe that Joe Biden has declared a civil war on them by mandating that employers with over 100 employees and the military have vaccinations.

Yes, they say civil war, and they say it’s already started. But, unfortunately, many of them also live in states where masks and vaccines are required by state governments, healthcare, and law enforcement.

The biggest message they have been sending out is, “it’s time” or “the time is now.”

They primarily use Tik Tok as a recruiting tool and let others know their willingness to commit violence. Then they tell people to message them or where to find them on Telegram.

I’m not scared. I think this is a small fringe of fanatical assholes, and if they were to rise up they’d cause some people grief and pain before they’d be put down. They rely on hiding in the shadows to have any courage.

What bugs me most is how goddamned stupid their ideas are.