This anti-vax insanity makes no sense. There are soldiers who are balking at getting a COVID-19 vaccine.

In a recent viral video, a senior airman in the Air Force asks viewers to help find jobs for service members leaving the military because they refuse to take the mandatory COVID-19 vaccine.

The unidentified senior airman, who posted her video on TikTok on Sept. 16, speculated that “a lot of the military is about to take an administrative discharge” for refusing the vaccine, which means they’ll be out of a job and presumably in need of work.

“Some people are doing it for medical reasons, some people are doing it for personal reasons, beliefs, whatever it may be, it’s about to suck,” the airman said. “What I’m looking for right now is if you’re an employer or you know employers that will undoubtedly employ us, a lot of us are looking at discharge and we weren’t expecting this so we have no idea what to plan for and I’m sure a lot of people are trying to plan for their future right now.”

You voluntarily enlisted in a job in which you can be ordered to charge into situations where people are shooting at you, and you will obey. You’re in a job where you can be ordered to kill other people, and you will do it. When you show up for training, they will give you a battery of vaccinations, and you accept it. You may get assigned to serve in tropical locations, and you will get vaccinated against diseases like yellow fever and Japanese encephalitis. You may get vaccinated against anthrax; I’ve never had the anthrax vaccine, how many of us civilians have?

And yet here’s an exceptionally useful vaccine that millions of civilians have taken with negligible deleterious side effects, that prevents a disease that is sweeping through the population, that protects against death and prolonged intensive care, and now you want to chicken out, and further, beg civilian employers for a job?

Or worse, this sanctimonious bullshit.

Earlier this month, Army Lt. Col. Paul Hague claimed that he would resign his commission just short of retirement, saying that he believed that mandatory COVID-19 vaccinations were an “unlawful, unethical, immoral, and tyrannical order.”

You could be ordered to drop a bomb on an Afghan village, and that’s OK, but taking personal responsibility and getting a nearly painless shot that protects the lives of your fellow soldiers and citizens, and suddenly that’s “unlawful, unethical, immoral, and tyrannical”? Jesus. That’s a new level of hypocrisy.

I have no sympathy with George Patton slapping a soldier with PTSD (a soldier who had faced far more serious threats to his life than a needle in the arm, and no, more violence isn’t a treatment for trauma), but by god we need another Patton in this case. 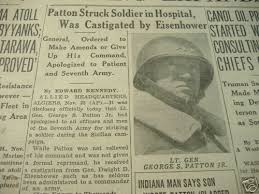 I need those bugs to feed my spiders! » « What sorting algorithm is that?