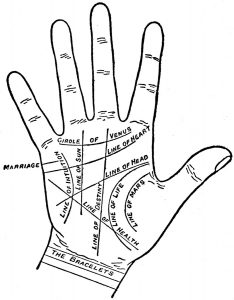 I’m going to blame Rebecca Watson’s latest video, where she talks about how some smart people must appreciate astrology as “just stupid fun”. I’ve been there, only it was palmistry, not astrology. And I regret it so much. I sometimes have this dream, and it makes me ache inside, except it’s not exactly a dream, more of a vivid memory that rises up to disrupt my sleep. It’s the time I hurt my father with pseudoscience.

In my teens, I was soaking in fringe nonsense. I had relatives who subscribed to Fate magazine, and those dreadful men’s magazines like Saga and Argosy, and somehow we ended up with how-to books about tarot cards and palmistry. I devoured them because I devoured every book I came across. I found them fascinating, but don’t worry — I never fell for any of that nonsense, it was more of an exercise in training myself to examine claims critically. I remember throwing myself deeply into these magazines (I can’t bring myself to call them “the literature”) and reading up on reincarnation, and ghosts, and NDEs, and Bigfoot, and UFOS, only to come away shaking my head at how pathetic the evidence was, and how grandiose the claims of the believers were.

I wasn’t doing this for the usual ego reasons I encountered among the skeptics — I wasn’t debunking stuff to show off how much cleverer I was than other people, because I didn’t talk to anyone else about it. I was curious, I wanted to evaluate these amazing stories, but out of a sense of honest enquiry about how the world worked. I didn’t read a copy of Fate magazing and then berate my Uncle Ed about how idiotic this rag was, and how nobody should believe any of it. I’d set it aside and move on to the next strange claim, for my own personal satisfaction. For all I know, my family might have thought I was a true believer, because I read all that crap and didn’t bother to say anything negative about it.

Yes, I was a nerd from an early age.

So, about my palmistry phase…I must have been about 15 years old. I was getting into it. Palmistry is wonderfully specific: every bump and wrinkle on your hand has a name and a meaning, and the length of a line or whether it was single, double, or trilple or the size of the bump had an interpretation, or rather an excuse, that you could point to while doing a reading. The specificity was appealing, but what I was not sufficiently aware of was that they were often contradictory, and that what the palmist was supposed to do was selectively piece together the various pieces to build a nice cold or hot reading of the person. That’s why it was so complicated and detailed in a piece-wise fashion — it was a vehicle to assemble stories to tell. Stories that didn’t really have any foundation in evidence or reality, for that matter.

I haven’t gotten to my dream yet. This is all background.

Oh, but I’m not done with the background yet! I have to say a bit about my father.

What my dad loved was the outdoors, fishing especially, and art. He liked to draw and paint. My grandmother had quite a few of his watercolors framed and hanging around her house (I think my brother has some of them now). There were nights when all of us kids and Dad would sit at a table and draw stuff, which I remember fondly, although I myself wasn’t much of an artist. I think if he could have lived the life he wanted he’d have been living in a cabin in the mountains where he’d paint and fish every day.

He did not live the life he wanted.

He had six kids and a high school diploma. He worked as a manual laborer, basically. He often worked two jobs, was frequently laid off (Seattle, Boeing, that up-and-down economy), and when work stabilized, he was a diesel mechanic.

OK, now I can tell you about my dream/memory, and why it hurts.

I am sitting on the steps of the back porch, reading a slim book on palmistry. Skimming, more like — it is a series of labeled diagrams of hands, more of a reference text. I’m flipping through it when Dad comes out and sits down next to me.

“What are you reading?”

Sometimes Dad would encourage me to read my comic books to him. He was a fan of Turok, Son of Stone and Burne Hogarth and adventure stories, but he’d settle for Batman or Spider-Man. I am about to deliver disappointment to my father.

“It’s a manual on how to read palms.”

My doom arrives. He offers me his hand.

Dad has awesome hands. Strong hands. Broad hands. Thick fingers. Scarred and blistered. Decades worth of grease and grime is ground into every line, every whorl. It is an intimidating hand for a soft-skinned nerdy teenager. I open up the goddamned stupid palmistry manual, and right there is a diagram of the spectrum of types of hands.

On the left, a long, slim-fingered hand, labeled an “artist’s hand”. On the right, a stubby-fingered paw, labeled a “laborer’s hand”. As a literal-minded student of the palmists’ art, I point to the latter image and say, “Well, Dad, you have spade-shaped hands.” Stupid, stupid, stupid. I cringe even now at my insensitivity. I was also ignoring the golden rule of this kind of psychic game: always tell the client what they want to hear.

Dad looks like I’d sucker-punched him. I’d stuck a knife into his self-image and twisted it hard, without even trying. I want to take it it back. I want to say, “I didn’t mean it.” Dad just looks at his hands for a minute, gets up and doesn’t say anything, and goes back in the house. I think I really hurt him.

In years to come, he’d occasionally remind me of that moment, usually with a chuckle and some self-deprecation, but he never forgot it, so I know it hit him hard. “Spade-shaped,” he’d say, and waggle those fingers at me. Or I’d try to describe my Ph.D. program, and he’d stop me by reminding me that he had spade-shaped hands.

“I love your hands,” I want to say, “those are the strongest hands I’ve ever seen, those are a good father’s hands, those are hands that worked hard for a family, those are heroic hands.” I never do, I never did, and now he’s gone. We weren’t an emotionally demonstrative family, or at least, I wasn’t, and my opportunity passed me by.

All I have left is regrets. And sometimes that memory rises up in the night and haunts me, and churns around in my brain and refuses to let me sleep. Then I have to confess my sin, with no one to absolve me.