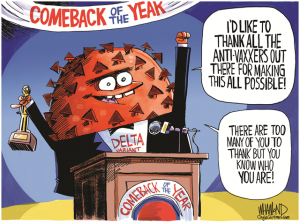 I could have told you months ago that this was going to happen. Thanks to the right-wing propaganda networks and the gullibility of the American citizen, the pandemic is coming back.

Federal health officials sounded an alarm Friday about a surge in U.S. coronavirus infections fueled by the twin threats posed by the highly transmissible delta variant and a stagnation in efforts to vaccinate as many Americans as possible.

During a White House briefing, Rochelle Walensky, director of the Centers for Disease Control and Prevention, said the seven-day average of coronavirus infections soared nearly 70 percent in just one week, to about 26,300 cases a day. The seven-day average for hospitalizations has increased, too, climbing about 36 percent from the previous seven-day period, she said.

“There is a clear message that is coming through: This is becoming a pandemic of the unvaccinated,” Walensky said. “We are seeing outbreaks of cases in parts of the country that have low vaccination coverage because unvaccinated people are at risk, and communities that are fully vaccinated are generally faring well.”

Imagine your community is threatened by a brush fire. Everyone rushes to put it out; they spend a whole bunch of money on fire-fighting equipment. They get it mostly extinguished, there are just some smoldering coals left on the ground, and at that point we all say, “That’s taken care of, everyone go home, take it easy.” The next day, the neighborhood is burning again. Carl’s house burns down. We’re all sorry about Carl, but the fire is out, mostly, a few embers still smoking over by the gas station, but hey, this new fire extinguisher we bought is too heavy to haul over there to put it out completely, let’s just give up.

Maybe it’ll go out on its own. There couldn’t possibly be an explosion of flames that destroys the whole town. We’ll deal with it then, if we absolutely must.

When will we realize that it’s going to take a consistent, sustained effort to tamp this problem down? Nah, it’s too hard, probably never.

About two weeks after Florida health officials discontinued publicly reporting some data and stopped issuing their daily COVID-19 summaries detailing cases, test positivity and vaccinations, some researchers remain concerned that the moves were made too early.

Even as the pandemic wanes, scientists such as Jennifer Nuzzo, a leading epidemiologist at the Johns Hopkins Center for Health Security, say that state health departments should be presenting more data, not less, while the medical and science communities continue to gauge the effectiveness of a still-fresh vaccination campaign.

“It feels like we’re running a marathon and we’re almost giving up a couple miles from the finish line,” Nuzzo said in an interview with the Miami Herald.

Did you know 20% of the new cases in the US are in Florida?