Critical Race Theory is simultaneously a profound readjustment of how we see American history, and a trivial, obvious fact. Yes, the United States was founded by genocidal European colonizers who built their country on the backs of African slaves. Yes, the Founding Fathers were philosophical hypocrites who wrote elegantly and beautifully about liberty and freedom and human rights and then went home to rape black women. Yes, that lovely classical architecture and those white pillars were erected on an Indian burial ground by black slaves. Get used to reality and accept it and do something about it.

The only people who reflexively object to Critical Race Theory are the worst and whitest buffoons in the country. So who do we see eagerly marching up to the microphones and cameras to express their dissent from reality? Two representative white atheists with arrogance to spare and a history of whining about “grievance studies,” Peter Boghossian and James Lindsay. 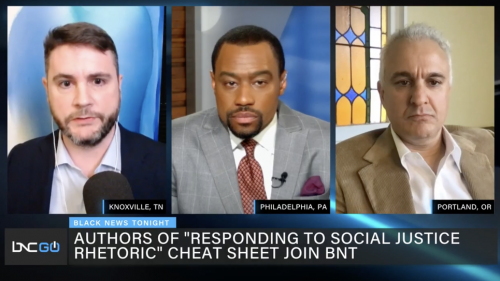 Jesus fuck, it’s embarrassing to be an atheist anymore.

Their ignorance got exposed and ridiculed on air, and now Michael Harriot completes the disembowelment. This is a truly ugly execution. Jimmy and Petey really need to stay at home, hiding under their bed, from now on.

Lindsay and Boghossian are college professors who have turned whitesplaining into an academic field called Grievance Studies. Basically, they propose that social justice is just a bunch of whining from people who don’t want to be held accountable for their lack of agency, unlike our white brethren who are coasting off a quarter of a millennium of privilege and convulse into conniptions at the very mention of this country’s racist past.

That’s just the prelude. Marc Lamont Hill, the man in the middle, let the two insipid fuckwits dig their own graves for 10 minutes. I about died when Lindsay, thinking he was so clever, tried to go on the counterattack and tell Hill that he was made uncomfortable by the word “folk” because Germans used the word “Volk” in Nazi propaganda. What a maroon…but here, enjoy the idiocy for yourself:

So when Lindsay and Boghossian began whitemanning using polysyllabic words to explain why all the negroes are wrong, they had no idea that Hill was a practitioner of the ancient African tradition of knowing what the fuck he’s talking about. The pair filibustered through two segments while Hill patiently allowed them to say the things they made up. When they were done, Hill surprised Pinky and No-Brain with why they would not be able to take over the world with their pseudo-intellectual tripe.

“Of course, we’re running out of time but I’m going to respond just so people don’t think I don’t have a response,” Hill said, before launching into an explanation that Critical Race Theory is only related to Critical Theory in the way that bullshitting is related to having someone slap the shit out of you; it’s not the same shit. They may have known that Hill was the author of six books and holds a Ph.D. in the subject on which they speculated, but they were unaware that Hill also holds the position that can only be described by the things he is not.

He is not one of their lil’ friends. He is not Boo Boo the fool. And, most importantly, if they thought they were going to overwhelm someone with their white-centric Critical Racist Theory, they should have known:

Marc Lamont Hill is not the one.

Bewildered, Lindsay could only respond by saying: “You actually know a lot about this.”

And then, with a smile, Hill invites them to come back on sometime to continue the discussion. He sure knows when he’s got some tasty fish on the line.

Ever wonder what a research lab at a small public liberal arts university was like? » « This is not a fundraiser — it’s Juneteenth!