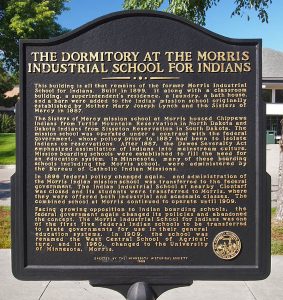 Given that all those bodies of dead children were discovered in a Canadian boarding school for First Nations people, and that my own university was initially founded as an Indian Residential Boarding School, I thought it appropriate to bring up a memo sent out by our chancellor.

The recent news of the discovery of the remains of 215 First Nations children at the Kamloops Indian Residential School in Kamloops, British Columbia (Canada) was horrifying and saddening. Tk’emlúps te Secwépemc tribal experts discovered the graves as part of a Canada-wide effort to find the graves of all First Nations children who died while attending Indian residential schools and whose bodies were not returned to their parents and their communities. To date, over 4,000 children have been identified as having died after separation from their parents in schools across Canada.

This horrific discovery only highlights the need for transparency on the United States’ own history with what were often called Indian Residential Boarding Schools. The National Native American Boarding School Healing Coalition has identified 15 American Indian boarding schools that operated in Minnesota and 367 schools across the U.S. These institutions were part of federal policies that separated children from their families and attempted to eliminate Native languages and cultures, with intergenerational impacts still felt across Indian Country.

One such school was established by the Sisters of Mercy Order in 1887 in Morris. As you know from our own history, this site went through several transitions, ultimately becoming the University of Minnesota Morris in 1960.

In the summer of 2018, archival research conducted by a then-Morris student and faculty mentor suggested that at least three, and possibly as many as seven, Indian children who died at the boarding school in the late 1800s and early 1900s may have been interned in a cemetery plot on or near the present day Morris campus. Generally, the deceased children’s remains were returned to their parents, and indeed documentation exists for several such situations, but in this case no documentation has been discovered or located to show the disposition of the remains of the children in question.

Research by Morris faculty and by students, following up on the original archival research, revealed no specific evidence of a cemetery for the burial of children who died while at the School. However, we can also not say with certainty that no such cemetery existed. What we do know is that we have been unable to determine where the cemetery may have been located and what ultimately was the disposition of any individuals buried there.

In April 2019, with the guidance of UMN Morris’s American Indian Advisory Committee and Dakota and Anishinaabe elders, UMN Morris hosted a ceremonial gathering to inaugurate an era of truth telling, understanding, and healing regarding the history of this land. It was a first step in remembering the children, and their families and communities that have been negatively impacted by the boarding school on this site and all those across Minnesota and our nation. The campus is indebted to the late Mr. Danny Seaboy of the Sisseton Wahpeton Sioux Tribe who led that gathering “remembering the children that were here” and the Woapipiyapi ceremony “to fix it so that the people are happier.”

In November 2019, Mr. Seaboy again led the campus and tribal leaders in a ceremony to bring support to University of Minnesota Morris students, children, and families of the boarding school era, and all those carrying intergenerational trauma. In November 2020, Anishinaabe cultural and spiritual advisors, Mr. Darrell Kingbird Sr., citizen of the Red Lake Nation, and Mr. Naabekwa Adrian Liberty, citizen of the Leech Lake Band of Ojibwe, led the second annual ceremonial gathering to support the UMN Morris Native American community and our campus for understanding, healing, resiliency, and strength. Auntie in Residence, Tara Mason, a citizen of the White Earth Nation, provided cultural teachings and supported the ceremonies. We appreciate all who participated whether safely in person, virtually, or individually in quiet and heartfelt ways as we came together as a community. We take to heart Naabekwa’s encouragement to continue in our collective efforts of understanding and making our campus a space of healing and positivity.

The campus has joined the National Native American Boarding School Coalition to further these efforts. We value their critical work in truth telling, understanding, and fostering healing from these heartbreaking traumas and losses.

I wanted to acknowledge the tremendous insights and guidance we have received from the elders who have worked with all of us to better understand and remember our past here on the Morris campus. Their work, and ours, will never be done. Healing is not a point in time; it is a journey, and I will update you further, as will incoming Acting Chancellor Janet Schrunk Ericksen, with any new information as it becomes available.

The first leader of the Sisters of Mercy in Morris was Mary Joseph Lynch, who at least took the liberal position of forbidding corporal punishment, but at the same time the children often tried to escape, which tells you it wasn’t a desirable place for them to be. Just the idea of forcibly separating children from their parents is appalling. Morris was the largest Indian boarding school in Minnesota.

Also appalling is the knowledge that half a dozen children died here, and records are so poor that we don’t know the precise number, their names, or where they were buried. There is no justifiable excuse for what was a genocidal action against the native people of this land. All we can do is try to make amends for what our ancestors did, and correct the ongoing discrimination against Indians in the US.