Once upon a time, the growing atheist community was shattered by the emergence of a disruptive faction who thought there is more to this business than just disbelieving in gods. They were tyrants who wanted to force atheists to do more than yell slogans about how religion is a cancer, and maybe build constructive communities. These were the wicked Social Justice Warriors, or SJWs. They committed the abominable crime of bringing feminism into atheism, of being anti-war and anti-racism, of supporting equality with even LGBT people, and tainted the idyllic purity of true Reason and Rationality with…with values <hack, spit> and ideology (atheism was free of ideology before, existing in a realm of pure thought). These SJWs dared to dismiss the great good Old Guard of Atheism when all they did was exhibit a little light misogyny or xenophobia or corruption. They dared to criticize other atheists! They must be punished!

Well, I confess: I am one of those SJWs. Some people think I’m one of the ringleaders of this diverse group of terrible egalitarians and idealists, and therefore, they are entirely justified in coming to my blog and…actively demonstrating that I was right all along, and there’s a deplorable subset of atheists who aren’t very rational at all? I don’t get it, but regular readers of Pharyngula have noticed a series of abusive, nasty, misogynistic & homophobic & transphobic & anti-semitic & just plain vile comments showing up lately. Like these: 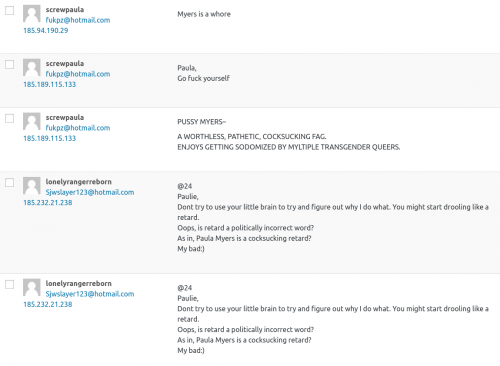 Just so you know, these are all from one lone vigilante, out to prove that he is a smart, reasonable, logical representative of modern atheism by going on an obsessive crusade against SJWs, using obscene slurs against everyone who is not a white Anglo-Saxon cis het man. He’s gone through dozens of hotmail accounts and made hundreds of these short, thoughtless posts to make his point, whatever it is, and I’ve just been blacklisting his accounts and deleting his obscenities almost as fast as he makes them. I don’t understand why, but he seems bound and determined to prove that some atheists can be deplorable, hateful, and illogical by making an example of himself.

So, I’m sorry to say, I’ve switched on the commenting feature that holds a new commenter’s first post in a queue awaiting my approval. This shouldn’t affect regular commenters, but if you’re new here, there might be a delay in your comments appearing. All because one atheist is an asshole.

Do you need another reason to despise the cops? » « Teaching in Kansas sure must be different