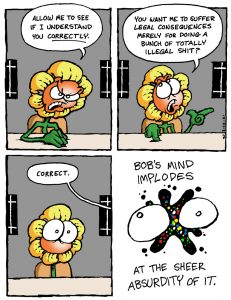 There are a lot of people who participated in the recent insurrection who are pooping their diapers right now, and I’m here for it. They seem to be shocked that they are actually being held accountable for breaking the law. It’s hilariously stupid.

Take, for instance, the case of Debra Maimone and Philip Vogel, two business owners from Pittsburgh. One of the slight surprises emerging from these proceeding is how many of these people are reasonably well-off, middle class small business owners by day, and shrieking MAGAts the instant they get on the internet. Maimone and Vogel are definitely in that category, and the capitol insurrection was their opportunity to bring their online persona out into real-world action. They still tried to hide their identities behind masks, but poorly, and the police have thoroughly documented their presence in the event (pdf). All those security cameras caught their every move, including when they briefly took the mask off to take a selfie (brilliant criminal minds at work), when they broke in, when they moved into very offices, and when they stole stuff from capitol security. In some ways, it’s rather chilling how completely they monitored every movement of these individuals.

They also got a bonanza of information from Parler. Hoo boy, Parler was like the Rosetta stone to break far-right coding. People had to register with real names and all kinds of confidential information, so once the police got that, they could trace all kinds of loud-mouthed assholery made under the cloak of anonymity (they thought!) straight to idiotic small business owners. Like this absurdity from Debra Maimone: 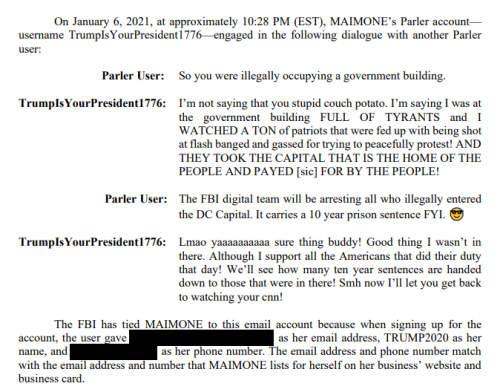 She praises those brave patriots who occupied the government building FULL OF TYRANTS in one breath, and in the next insists oh no, she wasn’t in there. She was. She’s a chickenshit who just revealed that she knew her actions were illegal, but is going to deny it to avoid the consequences.

I’ll be mildly surprised if she gets the full ten-year sentence from the court, but I’ll be even more surprised if she escapes conviction or gets a trivial sentence — the case against her is awfully strong. She and Vogel are now out on $10,000 bail, but the tyrants have told her she can’t have any guns while awaiting trial.

Super gross company. Owners are rude and outwardly racist. Asked me why I have a BLM sign in my yard saying they don’t work with people who support them. Umm… gee Karen how about because I’m black and I believe in equality.

I’m also a Christian so I forgive those who display hateful behavior–but it’s clear they are not because when I referenced John 13:34 they had no clue and seemed confused. Typical.

To add insult to injury they quoted me one price on the phone, but when they saw me they doubled it before even going inside my home.

It’s obvious that when they realized I’m a black woman they decided to try and screw me over.

This one is a little more succinct.

They promised me they’d do some work for me this weekend but now cannot as they have been arrested for being domestic terrorists.

The victims, a great loss; the killer, no loss at all » « Giving up