I noticed quite a few people yesterday trying to argue that the fact that a murderer walked into three Asian-American businesses and killed 6 Asian-American women wasn’t an act of racism, which kind of blows my mind. Of course it was! It was also an act of misogyny. And also of gun fanaticism. And puritanical religious self-loathing. And ignorance. And general hatred of unfamiliar cultures. It can be all of these things at the same time!

Have people never heard of the concept of intersectionality? Or have you just swallowed whole the conservative rejection of the idea?

Here’s another dirty concept to the conservative brain: Critical Race Theory. In part, that’s the idea that white supremacy exists, and is supported by our legal system (and, by the way, needs to be rooted out). The law turns a blind eye to racism. Hoo boy, does this Georgia police department do that. Why did that murderer kill those women? He had a “bad day” (I’ve been having a lot of bad days lately, never thought to vent by going on a killing spree). He was mentally ill (oh my, isn’t that a familiar refrain?). He was a sex addict (who focused his addiction on Asian women). The police asked him if his crime was racially motivated, and he said “no”…and they believed him. Why would a white boy from a good Christian family lie about that? The police department is rotten to the core. I’m going to guess that many of the officers are closet white supremacists themselves.

Watch this dissection of that appalling press conference.

Then there’s this Facebook post by Captain Jay Baker (the bald fuck in the video), in which he chortles over Trump’s claim that the virus was imported from “Chy-na”. 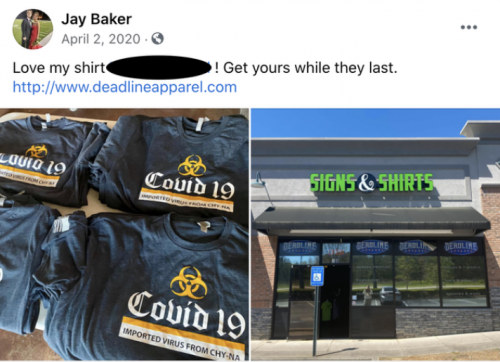 Jesus. Fire him. Cut out the rot. Defund the police.

Although he does provide a beautiful perspective into why Critical Race Theory is important and valid, I will at least say that for him.