I never want to see what the local police are saying about the citizens they “serve and protect”. I suspect that some of it will be like what was exposed when text messages between Eureka, CA police officers were leaked. It’s a lot of contempt for the homeless and mentally ill, sexual descriptions of women they see on the street, and macho promises to shoot and beat hippies, drug addicts, and protesters. 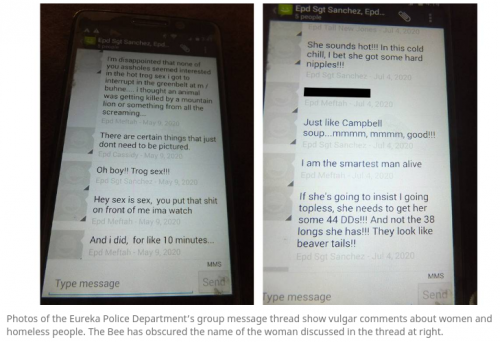 Among the most appalling stories there was that the local public health department was asking these untrained, unprofessional, abusive thugs to check up on people who contracted COVID-19. The police called them “outbreak monkeys”. And these are the people expected to aid public health officials? Inappropriate much?

Take away a big chunk of the money spent on assholes with guns and recommit it to EMTs and social workers and people who actually know something other than how to threaten and harm others. At least some people are aware of what needs to change.

Banter like that captured in the Eureka text messages shows the rare, unvarnished reality of how some officers view their work, said Stinson, who used to work for a police department himself.

“This is the police subculture of that agency unmasked,” Stinson said. “This is the officers in their natural habitat, talking amongst themselves. It’s an us-versus-them mentality. It’s a sexualized environment where policing is violent. It’s ugly.”

The messages also show an environment resistant to change in the city, which for years has also struggled with a swell of drug abuse, homelessness and overwhelmed social services.

One officer in the Eureka texts appeared to ridicule efforts to ban chokeholds and other deadly restraints against suspects. In one text exchange, an officer shared a YouTube video about “control techniques” being barred in New York City. “(Gov. Gavin) Newsom is already j—- off with excitement hoping he can get it here I’m sure,” another officer wrote.

“At the end of the day, whether somebody was joking or not joking, or intended to to be offensive or not, we have to be responsible and accountable for our words and our actions,” Watson said. “And we have to be careful that everything that we do on and off duty reflects in a positive light, that reinforces trust with our community.”

Robinson, the former chief in Phoenix, said comments like those in the text messages are detrimental to the good work the vast majority of law enforcement officers are trying to do — especially given the recent reckoning facing law enforcement.

He said, based on the text messages, they need a cultural change.

Yeah, right. Two of the officers responsible for some of the worst messages have been put on paid leave; their co-conspirators in the department are probably just waiting for the heat to die down so they can put them back on the streets.

I think I might have been the beneficiary of a Ponzi scheme » « Who had a bad day?