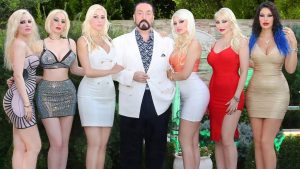 I read Turkey Sex Cult Chief Sentenced to More Than 1,000 Years in Jail and thought at first it was going to be about some ghastly poultry fetishist, but no, it’s something completely different.

A Turkish Islamic televangelist was sentenced to 1,075 years in jail on Monday for running a decades-old cult whose members were accused of crimes ranging from sexual assault to blackmail, money laundering and even espionage.

Adnan Oktar, who wrote books on Islamic creationism under the pseudonym Harun Yahya, was put on trial in Istanbul alongside 236 other alleged members or enablers of his network, state-run Anadolu Agency reported.

He became well-known in Turkey over the years, especially for provocative TV shows broadcast on his own channel. On screen, the cult leader surrounded himself with young women he called his “kittens,” who were often dressed in revealing clothing while he uttered opinions on religious and political matters.

Goodbye, Harun Yahya/Adnan Oktar! I still have a couple of copies of his Atlas of Creation, a truly silly book.

If Chauncey Gardiner were a malicious, hate-filled bigot… » « All work and no play makes….