The Fraternal Order of the Police is very unhappy about this cartoon by David Wayne Fitzsimmons being used in an eighth grade school lesson. 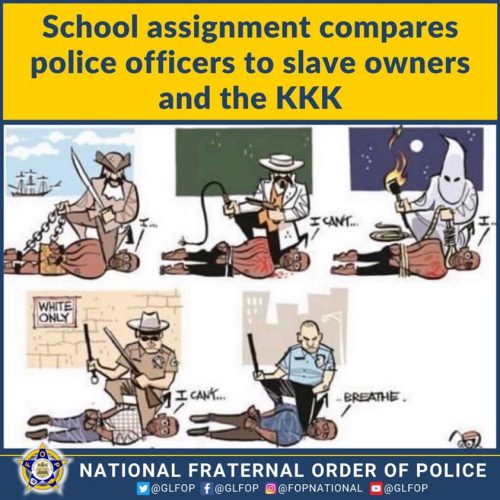 That is an EXCELLENT cartoon. Gold star to the artist and to the teachers! Make sure it goes national!

Oh man but the cops are pissed off. They demanded that the school retract the cartoon and make an apology, which, of course, the craven administrators promptly did.

A police representative accepts their apology, but says, the damage is done.

“It’s completely abhorrent. It’s disturbing and it never should have been included in any kind of assignment,” FOP National Vice President Joe Gamaldi said.

The truth hurts, and it hurts bad. Fuck the cops, make them see the injustice until they cry.

Is Ben Shapiro’s 15 minutes almost over? » « Quick! Do some community science before winter strikes!