The “cowboy” mythos is a destructive toxin. Heather Cox Richardson explains it well. Although maybe a shorter summary would be “this man is an asshole”. 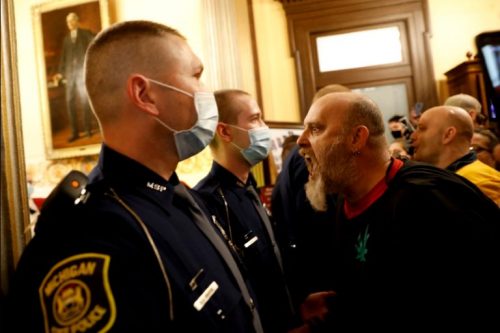 John Wayne and Ronald Reagan are still regarded as good people and heroic champions of the common man, when they were just superficial, shallow jingoists. I predict that ten years from now there will be a vocal set of ignorant people who will likewise revere Trump. It’s never going to end, no matter how awful and destructive these “cowboys” are.

By the way, that Michigan rally was an astroturf operation funded by right-wing fanatics.

The two groups behind the “operation gridlock” rally in Michigan on Wednesday have ties to the Republican party and the Trump administration.

The Michigan Freedom Fund, which said it was a co-host of the rally, has received more than $500,000 from the DeVos family, regular donors to rightwing groups.

The other host, the Michigan Conservative Coalition, was founded by Matt Maddock, now a Republican member of the state house of representatives. The MCC also operates under the name Michigan Trump Republicans, and in January held an event featuring several members of the Trump campaign.

As David Neiwert points out:

Unfortunately, the mainstream media—with Fox News’ coverage, which almost perfectly replicates the network’s handling of the tea party movement back in 2009-10—does not seem to have figured this out. The anti-lockdown protests have generally featured very small crowds (with a few notable exceptions, including the Olympia event), and yet coverage of them so far has created the impression that the numbers of protesters are massive.

They aren’t. And counterprotesters are not appearing at these events because they generally are willing participants in the collaborative effort to reduce the spread of the virus. So the picture emerging in the media of the anti-lockdown crowd is one that, once again, portrays them as sincere citizens out defending their liberties rather than the fevered ideologues that they actually are. As Charles Pierce adroitly observes:

These protests are tiny. Five states is not “coast to coast,” even if small groups of bored loons flocked together in Florida and Washington state. Every scrap of polling data indicates that massive majorities support continuing the measures that seem to be working to flatten out the pandemic. To inflate these small gatherings of angry shut-ins as a national movement is profound journalistic malpractice.

Some distant day from now, perhaps, the media that are bending over to enable this insanity will be forced to recognize the cold reality that the public massively supports the COVID-19 lockdown, and the protesters are actually a tiny handful of bellicose nutcases who have no regard for democracy or a civil society. Someday.

That “perhaps” is significant. I’m more pessimistic than Neiwert is.

Classic orb » « I only find out now about this?