I’ve been seeing some wild speculation that this pandemic is the product of genetic engineering — that it’s a biowarfare weapon that escaped from a lab somewhere. This is nonsense. I’ll refer you to an article in Nature Medicine, The proximal origin of SARS-CoV-2, which discusses a systematic analysis of the structure of SARS-CoV-2 in comparison to other coronaviruses.

It is improbable that SARS-CoV-2 emerged through laboratory manipulation of a related SARS-CoV-like coronavirus. As noted above, the RBD of SARS-CoV-2 is optimized for binding to human ACE2 with an efficient solution different from those previously predicted. Furthermore, if genetic manipulation had been performed, one of the several reverse-genetic systems available for betacoronaviruses would probably have been used. However, the genetic data irrefutably show that SARS-CoV-2 is not derived from any previously used virus backbone. Instead, we propose two scenarios that can plausibly explain the origin of SARS-CoV-2: (i) natural selection in an animal host before zoonotic transfer; and (ii) natural selection in humans following zoonotic transfer. We also discuss whether selection during passage could have given rise to SARS-CoV-2.

A little translation: the virus has a spike protein that binds to an enzyme on the surfaces of cells, called angiotensin converting enzyme, or ACE. This enzyme is important in regulating blood pressure, and is expressed by cells in lung capillaries (fun fact: your lungs play an endocrine role in sending out signals that maintain blood pressure). This is one reason the virus has such a dangerous respiratory effect — the lungs are the primary targets, where it can use the spike protein to bind to cells that express ACE and drill into them.

The RBD is the Receptor Binding Domain of the viral spike, and is the most variable part of the virus. This makes sense: the RBD is the key the virus uses to get access to your cells, and it varies because it confers target specificity. So there are all these different varieties of coronavirus, most of which don’t bother humans because they lack the human key — they are adapted to invade other animals’ cells. SARS-CoV-2 has acquired a spike with a human unlock code. Could some cunning super-villain have modified the spike?

Not likely, for several reasons. The virus has other similarities to coronaviruses in other animals; it’s not a de novo construct, but is a member of a large family of viruses. The modification to the spike protein is unusual. It works, but it’s not one that scientific experts would have used — they would have used something that would have been previously modeled. Then also bioengineers have lots of clever tools that could be used to stuff a desired sequence into a virus, but they all leave tool marks, little scraps of the molecule used to do the replacement. Those marks aren’t there. The best explanation is that we’re just seeing natural selection amplifying random variations in the spike.

While the analyses above suggest that SARS-CoV-2 may bind human ACE2 with high affinity, computational analyses predict that the interaction is not ideal and that the RBD sequence is different from those shown in SARS-CoV to be optimal for receptor binding. Thus, the high-affinity binding of the SARS-CoV-2 spike protein to human ACE2 is most likely the result of natural selection on a human or human-like ACE2 that permits another optimal binding solution to arise. This is strong evidence that SARS-CoV-2 is not the product of purposeful manipulation.

Yeah, see, if I were a nefarious super-villain, we already have an even better RBD we could yank out of other viruses, and I would have used that to build a deadly virus. But instead, the SARS-CoV-2 RBD is some clunky variation that came out of nowhere, by accident, without any other signs of intentional manipulation.

They also consider the possibility that this was an accidental variation acquired in a lab — if you pass a virus through a lot of host cells in a cell culture system, it will continue to evolve, and you might imagine the RBD might acquire a random variation that allows it to thrive in those cells, and then it accidentally escapes the lab. This is also unlikely, because it shares a lot of similarities with the pangolin coronaviruses. It’s more likely to have arisen from an existing pool of related viruses in the wild, then either acquired its novel binding site there, or after infecting humans and experiencing selection for better binding to human cells.

The best strategy is to look for intermediates in animals, or in the sequences of humans who were infected early in the pandemic.

The identification of a potential intermediate host of SARS-CoV-2, as well as sequencing of the virus from very early cases, would similarly be highly informative. Irrespective of the exact mechanisms by which SARS-CoV-2 originated via natural selection, the ongoing surveillance of pneumonia in humans and other animals is clearly of utmost importance. 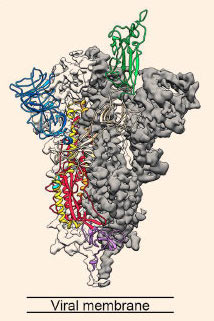 The viral spike protein. The RBD is in green.