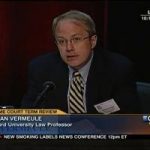 I’ve lost a lot of respect for Harvard over the years, and for professors in general. They’re just people, and there are ignorant people in every discipline and locale, like this guy, Adrian C. Vermeule.

…when [Harvard Law professor] Vermeule took dead aim at atheists, the critics were silent. In defense of state laws that forbid atheists from holding public office or serving on juries, he tweeted that they are “sensible” because atheists “can’t be trusted to keep an oath.” This wasn’t an inadvertent insult, like his tweet about “camps” may have been; Vermeule demeaned atheists intentionally. The critics were silent because bigots enjoy far greater freedom to slander atheists than any other minority group.

I’d argue that trans and gay folk are more freely slandered than atheists, for example, but the point is that this guy Vermeule said something appallingly stupid, and apparently really believes that Christians are intrinsically more moral and trustworthy than atheists.

All I can say is that we can look at professed Christian Donald Trump and professional rat-fucker with a Nixon tattoo on his back, Roger Stone, has “found Jesus”.

“I feel pretty good because I’ve taken Jesus Christ as my personal savior,” Stone said in his first on-camera interview since his sentencing. “And it’s given me enormous strength and solace, because he knows what’s in my heart.”

Do you trust Roger Stone to keep an oath?