I’ve been doing a lot of maintenance on the spider colony, moving spiders into new, clean cages, and so far, throwing the old cages and the cardboard frames into a pile. This pile: 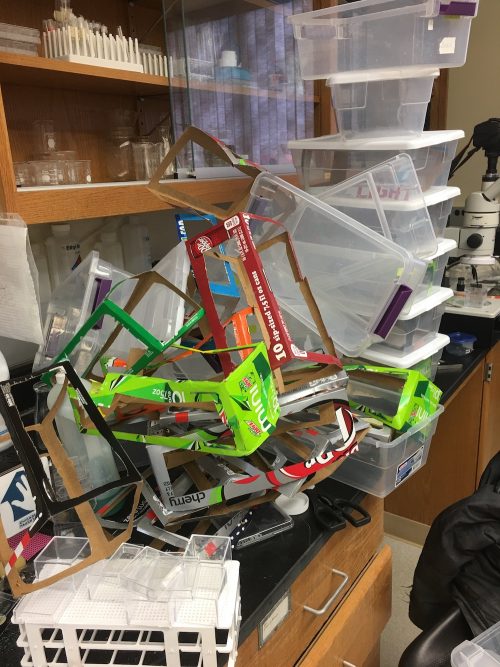 It’s colorful, at least. All the cardboard is going to be thrown out after being thoroughly inspected (today I found 3 egg sacs hidden in the irregularities of the old cardboard frames; one advantage of the new wooden frames is greater uniformity, so it’s easier to find new additions), and the plastic cages will be washed and stacked for later use. In the future, rather than just disrupting all the spiders all at once, I’m planning to do a regular cycle of cleaning up a few cages per week, so that they don’t all pile up at once.

Not shown is the pile of wood scraps and sawdust on the other side of the lab. That needs to be swept up and thrown out, too.

Also, I’ve made a difficult decision: I’m going to avoid posting spider photos here in the future. I know that it’s driven a few people away — I have no idea how many — and it’s sad, but some people have a visceral reaction to close up photos of arachnids. I’ve realized, though, that this Patreon thingie gives me an easy way to self-select people with its various tiers — I’ve got an “Arachnid tier” and an “Architeuthis tier” that differ in only one way: one of them will include posts with the special reward of spider stuff, and the other one has the special reward of no spider stuff. If you want to see more spiders, join the Arachnid tier, and if you’d rather not, you don’t have to do anything.

The downside is you’ll have to pay $5/month, and I’m not going to compel my fellow arachnophiles to cough up cash…an alternative is just to follow me on Instagram, where I also post spider photos. No charge!

Mayflies on Patreon » « OH NO RICHARD DAWKINS NO!