I have been neglecting my spiders this week — every day I get a little time with them, and then I realize I have to get grading done, and then I have to regretfully leave the lab to hunch over papers again. It’s unfortunate, too, because this is the week I’ve been trying to get them to breed, and there’s courtship to watch. 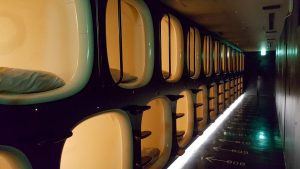 A little background: last year I had limited success with breeding because I was raising all the spiders in these 3cm diameter tubes, which is convenient and allows me to pack a lot of spiders into an incubator. The catch was that mating was fraught; put a male in a tube with a female and it was going to end in violence and cannibalism more often than not. Imagine that you wanted to study human courtship and mating, and your strategy was to keep women in those little capsule hotels, with plenty of food and water, and then every once in a while you picked some random guy and stuffed him into a capsule with a random woman, and then you planted a camera in the window to watch the fun. At best you’re going to see a strange and unrealistic version of mating…at worst, violence and death. Maybe cannibalism if you’re really lucky.

This year, I’m raising females in spacious cages where they can build large webs, and where there’s space to scamper off and be alone. I’m introducing males to these female-dominated spaces, and…well, so far it’s been less than exciting. It’s more like watching a junior high school dance. There’s a girl, hanging out over by the wall. Boy comes in to the gym, they notice each other, they look warily at one another. Their body language all says “I see you”, but they’re so nervous that you can’t tell whether they’re happy to see each other, or they’re threatening to vomit all over their shoes if they get too close.

The boy works up his nerve and approaches cautiously, sending as many friendly signals as he can. In spiders, this involves web plucking; they send vibrations down the web to each other. “Pluck pluck pluck?” he says. She fretfully replies “Pluck pluck pluckity pluck.” Is this promising? The boy is uncertain. “Pluck pluck,” he says, and reaches out with one arm, tentatively. “PLUCK!” she screams, and charges. Boy runs away. “Pluck pluck pluckin’ pluck pluck,” she hisses, in her position near the punch.

At least, that’s how I interpret this one encounter I watched.

We start out with the male spider center right; he’s advancing towards the female, top left, just out of view at first. He’s been plucking up a storm just before the clip, and both are slightly agitated. He reaches out to her and…devastating rebuff. He flees. She settles down, but continues to pluck at the web…sort of angrily, if I anthropomorphize. When he begins to approach again (off screen), she rushes out to chase him away.

I left the two of them alone after that. There was enough space in the cage that they could separate safely, and he was quick to run away, so she’d have to be strongly determined to kill and eat him to pursue, and I’d put plenty of fruit flies in the cage beforehand, so she wouldn’t be that hungry. I came back the next morning (it was like a junior high dance with a lock-in, and no chaperones!) and rescued the male, who was hovering maybe 6cm away, body oriented to the female and looking attentive. I have no idea if mating was accomplished.

That’s been my week. Introduce potential breeding pairs, watch a little angsty teen dating drama, scurry away to grade papers, come back to find two spiders staring at each other, giving no hint about what they’d been up to.

“How was your date, son?” “It was alright, I guess,” he replies, sullenly.

“How was your date, daughter?” She screeches angrily in spider. I don’t know what that means.

Good news! The male was left overnight with New Arya, one of my females who has built a cozy little nest with scraps of debris. When I just checked on them, the male was right outside the nest, tapping. New Arya was reaching out and waving at him. I decided to just leave him there a little longer and see what develops.

Also, Texanne of the triangulosa clan had made another egg sac. That’s three for her.

We have a valuable export in this country! » « The worst Christmas song while grading is…