If this were a horror movie scenario, I’d be doomed. There I am, puttering around in the lab, feeding my pretties, when I notice that one of the egg sacs from Texas has hatched out, and there in the container was a small swarm of babies. “Oooh,” I cooed, and took them over to a clear spot on the bench so I could sort them out. I took the lid off and set it to the side — no worries with these little guys, they’re slow and content to just rest there on their web, and I took a few baby pictures. 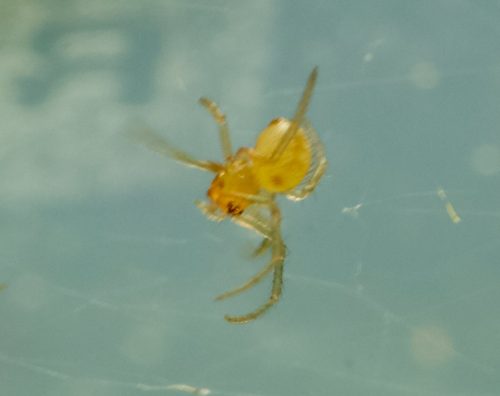 Then…little did I know but this container also held the mama spider. She had been lurking, hanging from the lid, and I hadn’t even realized that there was a large adult in the container.

On the lid…that I had just mindlessly set aside without even looking at it. She crept out and pounced, leaping upon my exposed right hand, racing across it, probably looking for a good vein to rip into! That was the first I noticed her, an unexpected tickling across the back of my hand. She’s a big one, too, so I just scooped her into a handy plastic box. And there she is, looking a bit pissed off. 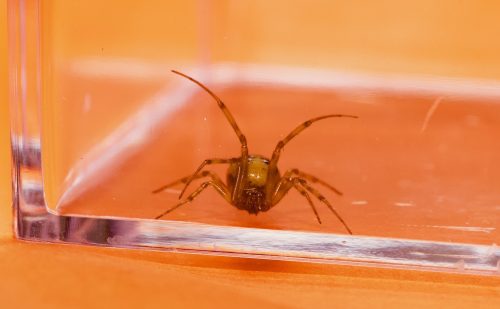 I named her Texanne, Texanne of the Texas triangulosas, and this was the best photo I could get while she was furiously skittering about. I’ve now moved her into a spacious cage with some flies to nibble on. Once she has calmed down, I’ll try to get some good photos of her abdominal pattern.

But yeah, now I’ve got a lot of Steatoda triangulosa, unexpectedly. That’s fine, they’re pretty and elegant, and seem to be doing well in the lab.

What happens when capitalists get their hands on innovation? » « Hey, John Oliver, do Richard Carrier next