I submitted a DNA sample to 23andMe, and now they send me periodic updates on what they’ve figured out lately from my genes. For instance, they’ve informed me about traits I might have. 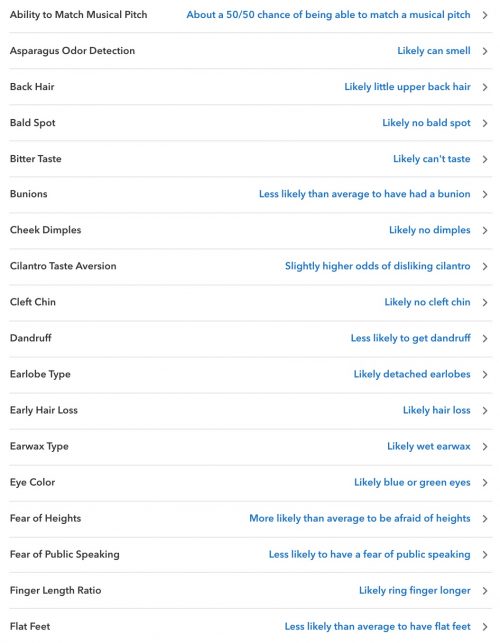 So what I take away from this is a lesson in uncertainty and doubt; is that the information they’re trying to share with the general public? Because that’s not what I get from their “traits tutorial”, which starts off “Our Traits Reports are a fun way to explore how your DNA makes you unique.” Where’s the fun? Where’s the uniqueness? Am I special in my resistance to bunions, or am I supposed to be entertained with the news that I probably have blue or green eyes? (Not blue, by the way, more green, kind of hazel; I usually say they’re the color of rich algal swamp mud).

My general impression is that this is “fun” in the way taking Myers-Briggs tests and horoscope readings are fun; it’s mostly bogus, phrased in a way to seem positive, and we can poke through them for affirmations of stuff we were pretty sure of, already.

I signed up mainly for the ancestry component, but even there, it’s vague.

My god, I’m a white guy! Who’d have guessed?

Meanwhile, this is just nonsense.

Yes, I’m a member of haplogroups that include European royalty, which is true of almost all the white people from Northern Europe. You might as well announce that I have pale skin, just like the kings and queens of old Europe! Whoop-te-doo! I am fun and unique.

I am not opposed to the idea of 23andMe, and think they’ve gathered a lot of potentially useful information. I just feel that the way its presented to the public is biased to reinforce false ideas of genetic determinism to induce people to participate, and that worries me.

Shouldn’t we expect social media to practice a little information hygiene? » « You need some Halloween spiders