It’s getting ridiculous. After recent events in which Facebook openly declares that lying in political ads is fine — as long as you pay them — they’re cracking down on…peach and eggplant emojis?

Facebook and Instagram are now prohibiting the use of peach and aubergine emojis in sex-related posts and nude images, reports indicate.

The new rules form part of the platforms’ new Community Standards which were implemented at some stage between 7 September and now, according to adult industry website XBIZ.com. 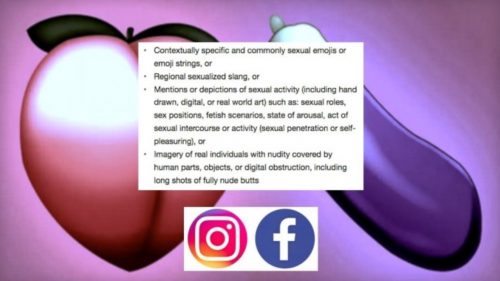 I’d much rather see people freely posting weakly veiled sexual images with peaches used to suggest genitals, than I would coded posts about killing Jews, but I guess Facebook has those priorities reversed.

I’m still trying out MeWe. It’s far from perfect, but at least it doesn’t have Facebook’s hypocrisy problem.

I am a terrible person, with my own prejudices, but at least I’m not a cult member » « Everyone likes cute furries more than spiders, I’ve noticed