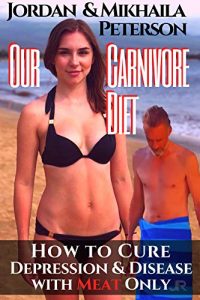 I read a curious book last night…well, more like skimmed an odd and repetitious assortment of short transcripts. Jordan & Mikhaila Peterson – Our Carnivore Diet: How to cure Depression and Disease with Meat only: Revised Transcripts and Blogposts. Featuring Dr. Shawn Baker was available for free on Kindle Unlimited, so I downloaded it.

The cover is a hint. It’s a poor Photoshop with sloppy layout, the kind of thing you’d see on a self-published romance novel with the smiling heroine in front in her best bikini, and in the background the brooding, rich Heathcliff she’s going to win over…except, oh dear, that’s her father in the swim trunks. Seriously, Dr Peterson, you’re rich enough to hire a graphics pro to do the design. Chuck Tingle could have done a far better job, and would have at least thrown in a few dinosaurs and a sentient physical manifestation or two.

All can be summarized similarly. Jordan Peterson or Mikhaila Peterson talk with a sympathetic host about how miserable their lives were, and how Mikhaila was afflicted with these terrible idiopathic diseases and Jordan was so depressed. I believe that part. Mikhaila had rheumatoid arthritis to such a terrible degree that she had hip and ankle joints replaced with prosthetics, and Jordan always comes across as a sad sack. They were really sick! And then they say they got better when they started cutting stuff out of their diet, finally getting down to nothing but beef and salt and water. Yay! They found the cure! And the gullible hosts praise them.

Except, I would say two things. They were suffering from real but idiopathic diseases. All “idiopathic” means is that the doctors don’t know the causes. Have they considered the fact that their “cure” is also idiopathic? I accept that they say they feel better now, but we don’t know that their all-meat diet has anything at all to do with it, and announcing that they have the universal CURE in a book title is classic quackery.

The second issue is that every chapter in their book is a repetitive recital of the same damn things: the same two people describing their complaints and their history, in nearly the same words, in public broadcasts over and over. If you repeat the same anecdote 11 times, it doesn’t magically transform into empirical data.

After reading their best case summary of their diet, I am not at all tempted to try it. In fact, I’ve gone the opposite way in my life, cutting way back on meat and enjoying a vegetarian diet, and I feel pretty good.

If I repeat that sentence 11 times would you find that a compelling reason that you should conform to my dietary rules? I would hope not.

Maybe if I also put a photo of my wife in a bikini on the cover?

Playing with a camera today #spider » « All it takes is a breakfast cereal to trigger a confession?