We go from the sublime to the hideous. When we were doing our routine check for egg sacs the other day, we discovered that Brienne had produced a nice one for us, deep in the elaborate network of webbing she had built in her box. It’s the pale oval on the lower left in this photo. 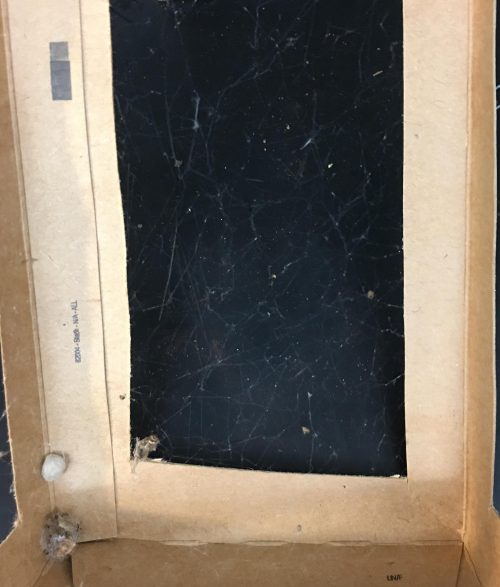 But…no Brienne. She had disappeared. Look below the egg sac above — there’s a tangled mess below it. I zoomed in on it. It’s an ogre’s nest, apparently. 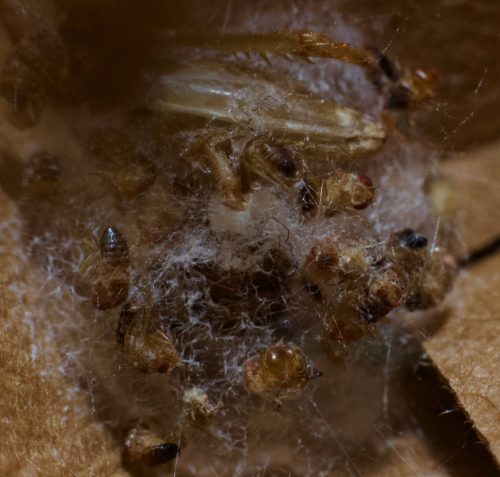 Ick. Dead flies, bits of dead cricket carapace, all strung together with thick, ropey cables of webbing. Spiders make multiple kinds of web, you know, and these spiders will make cables of web silk that are remarkably tough and hard even for humans to break. I tugged at these with forceps, and nope, they aren’t going anywhere, shy of ripping out the whole structure and possibly injuring its occupant.

Yeah, Brienne is hiding deep inside, the dark shadow near the center of the nest.

These animals always surprise me. They’ve got a complex range of behaviors, and I have no idea what triggered this strange construction. The other spiders in the colony aren’t doing it. I’ve seen a few examples of spiders cobbling together debris into shelters, but it’s not universal, and usually they aren’t this thickly armored and enclosed.

Next they’re going to start assembling tools and weapons, and then you’d better look out.

I caught a whole bunch of my students playing hooky today » « So beautiful, it’s art