We found one unusual spider today, and she was frustrating. First thing we noticed about her: she looked like our familiar Parasteatoda, except that she was half again, maybe twice the size of the house spiders we usually see. She was also relatively lightly colored, compared to the mottled brown of our familiar friends. So I caught her, with the idea that I might be able to more closely examine her in the lab. Hah. This was the most frantically active spider I’ve ever had to work with, scrabbling non-stop at the sides of the vial. I tried everything to get her to hold still and let me do some close-ups and measurements — she was having none of that. 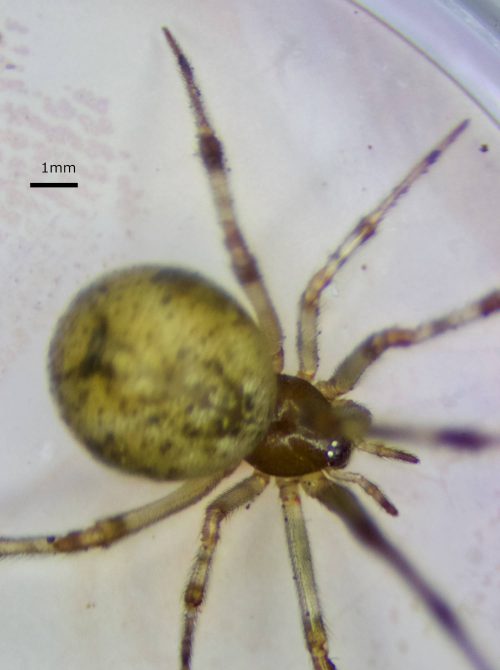 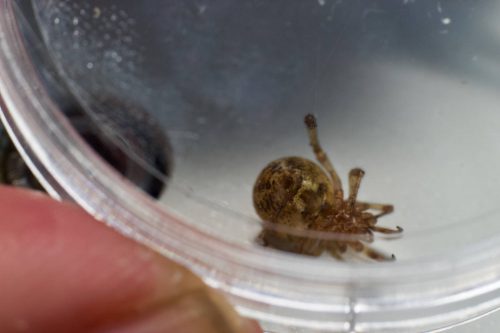 I finally just let her out to scurry about on my hand — I thought if nothing else, it would help give some perspective on her size. Have you ever tried to focus a camera and keep a spider in view as it is running all over your hand, and while you’re trying to make sure it doesn’t escape? She wasn’t cooperative at all.

One alternative, one a real arachnologist wouldn’t balk at, would be to kill and fix her, maybe even do a little dissection. The thing is…I’ve never killed a spider, not even in my lab work, and I’d like to maintain that record. I’m a biologist, dammit, I study life, not death, and while I’ve killed flies, fish, kittens, rabbits, mice, dogs, and goats in the line of duty, I’d rather not, thank you very much, and if I can study living animals without harming them, I’d rather do that. I’m sure I’ll eventually have to do some of the dirty wicked killing business with adult spiders, but I’ll put that off as long as I can.

Anyway, I think I exhausted her eventually, and she just wanted to curl up and hang off the end of a brush. I still couldn’t get her into the orientation I wanted. 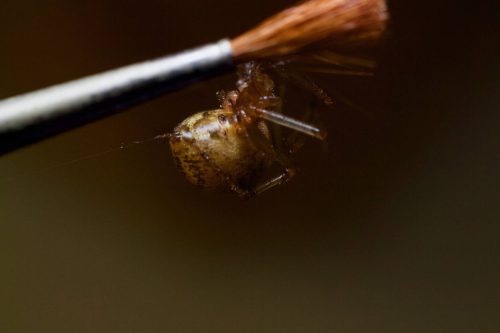 My current plan: I’ve put her in a large vial, fed her some flies, and hope she spins a nice cobweb in there. Once she’s hanging from a nice strong web frame, I might be able to rotate the vial around and get a better shot of her.