Yet here I am, thinking it might be fun to watch a women’s soccer match. I’m not even talking about the women’s national team — a local team. They deserve support, too, and apparently, women’s teams play a better and more exciting game than men’s.

Then, after the USWNT won the world cup this past weekend, listen to the audience. This is amazing. They’re chanting “equal pay!” in response to the victory.

Somewhere in that stadium @shelbylcole is screaming “equal pay” at the top of her lungs and deliriously happy pic.twitter.com/iSAOeTWL9W

The discrimination has gotten so obvious that crowds of people are screaming about it. Will anything be done?

This also has me wondering “what about the menz?” The differences are glaring: the women’s team is bringing in more money, is empirically better than the men’s team, and are playing more games than the men, yet they’re getting paid a lot less. If I were on the men’s team, the discrepancies would be making me uncomfortable. But their response so far has mostly been silence. How…odd. I guess solidarity with one’s colleagues is just too much to ask. 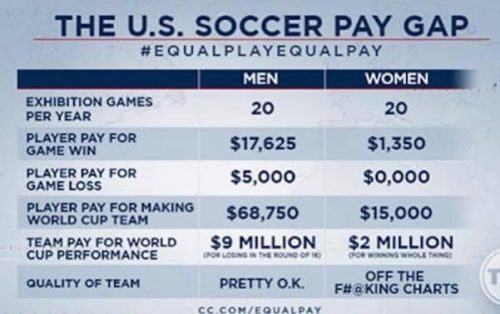