Here’s a beautiful fossil from the Green River beds, a whole school of fish fossilized in formation. 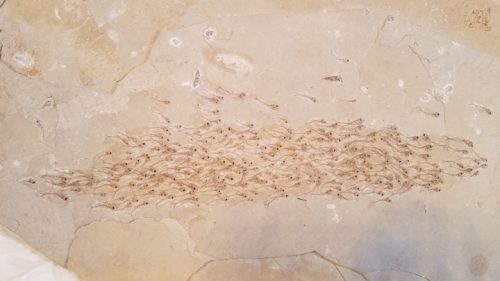 The article mentions that scientists are uncertain how the animals were locked down in sediments quickly enough to preserve their relative position…or even if this is behavior frozen in time, but maybe an alignment generated by whatever process imbedded them in sediments. It’s something scientists do all the time, admitting that they don’t know something.

Ah, but here comes Ken Ham, professional fool with a sense of absolute certainty. He knows the answer!

A recent article reported on the attempt by several experts to discover how this fossil, found in the Green River Formation, was formed (and I encourage you to go to the article and see the photo—it’s a truly incredible fossil!). One expert, who has studied other fossils from the Green River Formation, said that the school of fish probably died together because of a volcanic eruption, a mass of oxygen-poor water, or a temperature shift, and then all the fish fell to the bottom of the lake and were aligned by the current and then fossilized. But mathematical models appear to rule out this explanation. Others have suggested maybe a collapsed sand dune buried them, but they admitted “they don’t have a great explanation.”

But I do! Since I start with the history in God’s Word, I have the proper lens with which to view the world. This school of fish was catastrophically buried by water-borne sediments during the immediate aftermath of the global flood of Noah’s day. It’s no great mystery!

You can almost hear him giggling at the thought that he is so much smarter than those stupid scientists.

Only one problem: this stupid scientist has read his Bible, specifically, Genesis 7:11-12. His answer doesn’t work.

In the six hundredth year of Noah’s life, in the second month, the seventeenth day of the month, the same day were all the fountains of the great deep broken up, and the windows of heaven were opened.
And the rain was upon the earth forty days and forty nights.

“Catastrophic” is a somewhat ambiguous word. To trap a school of fish in situ would require an event that locked them in place in a fraction of a second. The Biblical account of the catastrophe does not propose that everything was killed and flash-frozen in a picosecond, or a millisecond, or a tenth of a second, but an ongoing disaster that dragged on for a global flood taking forty days and forty nights and leaving everything under water for a year. In Answers in Genesis’ own Creation “Museum”, they have a video recreation showing a gigantic wall of water, a tsunami rising up hundreds of feet, sweeping in and destroying a village (and killing all the happy innocent children playing in it, by the way).

I am sorry, Mr Ham, but your flood, if we postulate that it even happened, was a prolonged, violent event of unimaginable magnitude. Your own site describes it as a year-long global catastrophe that destroyed the pre-Flood world, reshaped the continents, buried billions of creatures, and laid down the rock layers. Yet when it’s convenient, you now claim that it was a delicate, swift event that froze animals in motion. It reshapes continents, but it leaves a few fish unperturbed.

I think you need to go back and read your Bible. The Book of Genesis is short, the flood is described in only a few vague pages, I’m sure that if you concentrate real hard, you can get through it all. There aren’t even any long words!