Jordan Peterson has a brilliant idea. Not this one… 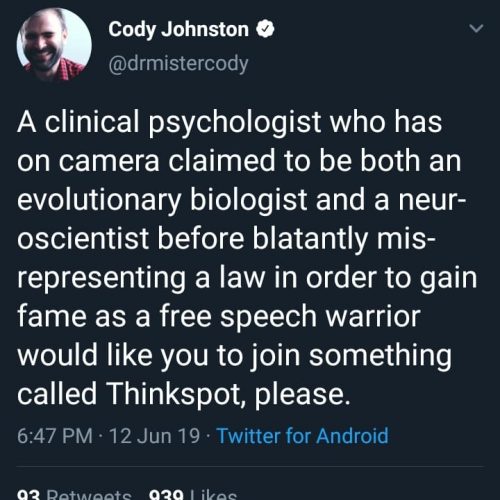 He’s pushing a new forum idea, only it’s not so new.

Jordan Peterson, the Canadian academic whom I think I could absolutely describe as a “Dingus Supreme,” has a new idea for an online platform. This is very important to Peterson because he and his largely alt-right fan base need a safe space online to share controversial opinions and practice free thought. So Peterson is launching Thinkspot, self-described as “a collaborative community where individuals can explore and exchange ideas in a thoughtful and respectful manner. The platform is an intellectual playground for censorship-free discourse.” It will also shadowban users.

The grand idea of Thinkspot, as far as I can tell, is that it’s a place for people who know how to be racist and sexist in a more dog-whistle-y way, not in the more direct way you might see on Twitter — or on Gab, the platform for people who are somehow too racist for Twitter.

I have so many questions! Here’s one. How will he coax “thoughtful and respectful” ideas from his existing fanbase of alt-right fanboys?

On his podcast this week, speaking with guest Joe Rogan, Peterson outlined how he planned to keep Thinkspot from spiraling out of control: a minimum word count. “If minimum comment length is 50 words, you’re gonna have to put a little thought into it,” Peterson said, as recapped by the right-wing site NewsBusters. “Even if you’re being a troll, you’ll be a quasi-witty troll.” I’m maybe a little more skeptical that Peterson and Rogan’s crowd — the one that spends hours at a time watching men yell into a microphone on YouTube — will have trouble coming up with 50 words to fill space.

Um, the cliche is “brevity is the soul of wit”. Long-windedness won’t help, although I am not surprised that Peterson thinks rambling on and on is the same as erudition. Also, you know that the regulars will evolve ways of turning empty noise into repetitive phrases to lengthen their comments to the appropriate length. This place is going to be the domain of droning bores practicing their mansplaining.

Here’s another scheme he has “invented”.

Even weirder was Peterson’s reveal that the site will hide downvoted comments. “If your ratio of upvotes to downvotes falls below 50-50, then your comments will be hidden. People will still be able to see them if they click, but you’ll disappear,” he said. What Peterson described is a completely valid form of site moderation. The tactic is also what conservatives have often misconstrued as “shadowbanning.”

You mean like Reddit and Disqus? All this is going to do is reinforce the majority view. Actual dissenting voices will be swiftly downvoted into oblivion. It sounds like a formula for building the most sanctimonious and stupefyingly maundering heap of trollery ever. It’s going to be a goldmine for ridicule.

I have another question.

Who pays for it? Who profits from it?