To the relief of many, I haven’t been saying much about my lab spiders lately, and there’s a good reason for that — they aren’t doing much. They’re all females, they’re not producing egg sacs, and despite checking daily, I’m not finding any Parasteatoda tepidariorum in the wild, either. I think they’re in hiding, reeling away from our horrible winter weather, and we haven’t had enough spring warming yet for them to emerge and start spawning lots of little babies for me to use to replenish the colony.

I miscalculated. I started with a small group of about a dozen spiders and several egg cases before the winter hit, and I clearly need a larger colony to maintain a balance of the sexes, because the females occasionally chow down on their partners, so I was seeing the male population in constant decline. Then I also failed to sort out the sexes in the second generation, because I couldn’t tell them apart.

Adult male and female P. tepidariorum can be easily distinguished, because the males have these massively enlarged pedipalps hanging off the front of their face — I can easily tell them apart with the naked eye, they’re so distinctive. These palps are a sperm storage and intromittent organ, specific to each spider species, which they use in a lock-and-key arrangement in mating, so they both deliver sperm and guarantee that they’ll only mate with conspecifics.

I’m sure the spiders will be back soon, and I’m looking up all kinds of stuff on recognizing sexes in pre-adult spiders so that I don’t repeat this year’s mistakes again. Then, jackpot: this paper on Formation and development of the male copulatory organ in the spider Parasteatoda tepidariorum involves a metamorphosis-like process, and it’s got exactly the information I need, and also is pretty nifty in its own right.

This is a close-up of the organ I’m interested in. Impressive and rather terrifying, isn’t it? Males have two of them, too, which makes me a bit envious. 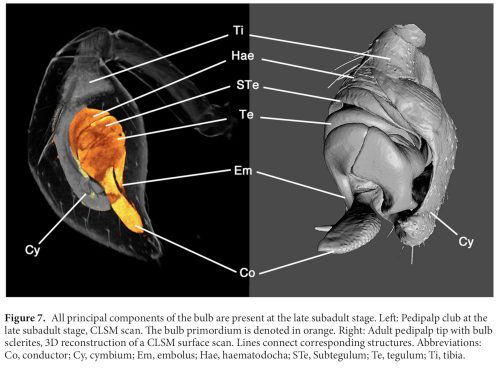 Like I said, these just leap to the eye when you examine an adult, since they’re much, much bigger than the female palps, which are slender and relatively delicate. I want to know how to spot them in younger sub-adults, though, and so here’s a developmental series illustrating the changes that go on. What’s interesting is that after an earlier molt, the terminal part of the palp swells up like a balloon, literally simply inflating with hemolymph (blood) to form a fluid-filled shell with a little primordium (in orange) of the adult palp resting within it. 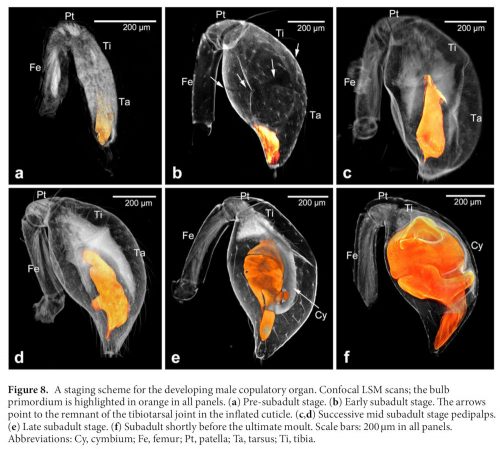 What’s fascinating here is that, in the subadult, the hemolymph will coagulate to form a stable matrix which may play a role in shaping the species-specific expansion of the primordium. So it inflates, fills with material that shapes development and then is gradually lysed as the adult cuticle grows and fills the space. 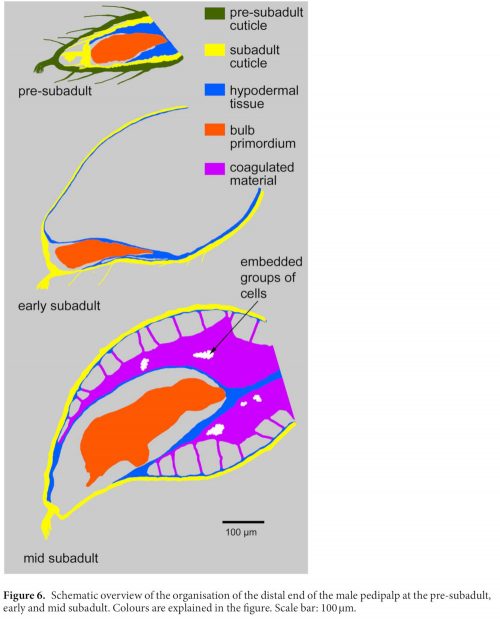 As the title of the article suggests, this looks familiar — we see something similar in arthropod metamorphosis, where the structure of the larva is actively broken down, basically digested with enzymes, and adult primordia (the imaginal discs) grow to replace the animal.

It also has me wondering if one of the reasons spider intromittent organs can be so labile, varying from species to species, is that this developmental process of interactions between a coagulated matrix and the primordium is highly plastic. The authors say it’s consistent within this species, but I’d be curious to know how sensitive the adult morphology is to fluctuations in that matrix.

Now I’m really eager to get more spiderlings so I can watch their organs grow.

Militant medicine » « We Believe in Dinosaurs