Several years ago, the Discovery Channel had this successful promotion featuring people singing “boom de yada” while doing awesome sciencey things, mostly. They were also promoting shows about fishing and blowing things up, but OK, it was sweet and memorable. It also featured brief clips of women doing things.

I guess they tried to repeat the success this year, only they forgot someone.

OK, all the stuff about manly men cleaning crab and driving cars and blowing stuff up again is…well, all right, it’s a way to get people interested in science, at least, even if it is only tangentially related to science. I try to be open-minded about approaches to stirring up enthusiasm for science. But it’s all men doing stereotypically masculine activities — there is precisely one woman in the whole thing, she doesn’t speak, she’s wearing skimpy clothing in a long shot as she walks through a forest. That’s it!

Come on, Discovery Channel. I know actual intellectual, thoughtful content isn’t on brand for you, but could you at least have a woman blowing up a truck while swimming with a shark or something?

It reminds me of all those men’s magazines from the 1960s which showed men in dangerous situations (everything in Nature is trying to kill you, you know, even turtles, and your role is to fight them off to rescue Your Woman). Discovery Channel is regressing. Maybe they should rename themselves the Saga or Argosy or True Men channel. 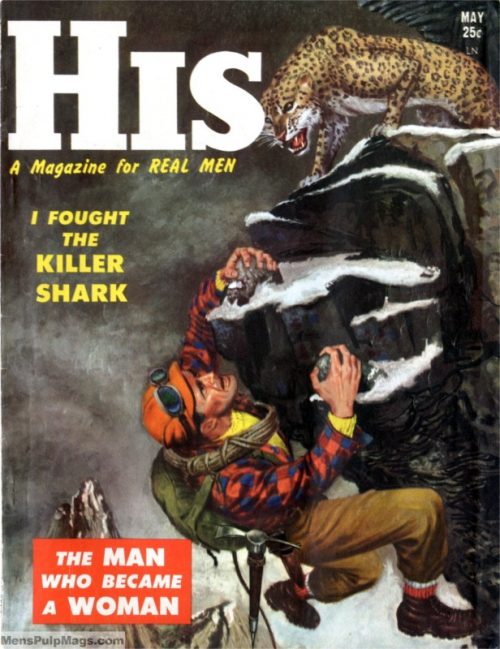 Why this should be is a total mystery » « Tucker Carlson is simply a dumb, sexist bully