I did a little experiment. I made a video criticizing a loony comic book guy who hates SJWs. I was also partly driven by disgust: he lies transparently. In this one video he made, he goes over published reviews of a movie online, taps on the screen with his pencil, and says the reverse of what the reviewer said, and his fans believe him. Honestly, it’s that blatant: he shows a positive, favorable review, which any viewer can easily read, and declares that, well, this reviewer can’t even stomach the film, contradicting the review in plain sight. It’s psychologically fascinating and revolting at the same time.

So I pointed out that he’s lying over and over again.

Of course his fans discovered that I’d criticized their hero and came flooding in, which is where it gets interesting. I’m told I have low testosterone, I’m boring, I need to watch more of his videos (no thank you), and since I’m obviously a Social Justice Warrior, my opinion is not to be trusted. For instance…

I think you misunderstood what SJW is . You are a Beta Male by definition. That would make you a white knight with a agenda to deny your own masculinity in procurement of selfish attention . Mostly by overly dominant females. Your total lack of information is also a symptom of a SJW mindset and especially a Beta Male.

Ouch. So many cliches. “Beta male”, “white knight”, “deny your own masculinity”, and I’m motivated solely by my craving for attention from dominant feeemales. None of that addresses any of the points I made, and in fact, none of the comments addressed the problem that this Ethan Van Sciver character is openly misrepresenting what he shows.

Further, they mainly seemed to be focused on their martyr complex and imaginary conspiracy theories. For example…

I couldn’t let that stand, so I asked, “Whose life has been taken away without due process by SJWs?﻿” He had an answer. 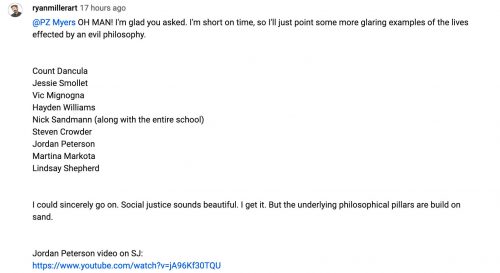 OH MAN! I’m glad you asked. I’m short on time, so I’ll just point some more glaring examples of the lives effected by an evil philosophy.

I could sincerely go on. Social justice sounds beautiful. I get it. But the underlying philosophical pillars are build on sand.

Count Dankula is a British YouTuber who trained a dog to make a Nazi salute in response to the phrase, “Gas the Jews”. He was fined £800 for violating the Communications Act with his tasteless joke. He then went on to raise £100,000 on GoFundMe.

Jussie Smollett is an American actor who apparently (it’s currently under investigation) staged a hate crime. I’m not sure why he’s on the list, since it blew up in his face and he’s destroyed his own career.

Vic Mignogna is an American voice actor for anime. Multiple women, many of whom were underage at the time, have stepped forward to accuse him of decades worth of sexual harassment, and he’s lost a major gig after an investigation, and anime cons aren’t inviting him to their events any more. So yes, he’s lost revenue for his actions. Deservedly.

Hayden Williams is a representative for Turning Point USA who was punched by Zachary Greenberg while he was staffing a table at UC Berkeley. Greenberg was arrested and is facing serious criminal charges. Greenberg’s life has been and is going to be seriously affected…is that a bad thing?

Nick Sandmann is the smug, obnoxious high school kid who confronted a Native American singer at the Lincoln Memorial. Nothing has happened to him or his school, other than that his behavior was shown in a viral video. His family is suing the Washington Post for $250 million.

Steven Crowder…are you fucking kidding me? He’s one of the dumbest people on YouTube, and he’s parlayed that into gigs on Blaze TV, Fox News, PragerU, and the Glenn Beck show. The only penalty he seems to have suffered is that Fox News dropped him…for criticizing noted SJW Sean Hannity.

Jordan Peterson…jesus. This is ridiculous. Peterson is a man who has turned his persecution complex and his bizarre Jungian ideas into a money-making machine. He has suffered no substantial consequence other than, perhaps, self-afflicted constipation from his terrible diet.

Martina Markota is a far-right fanatical Trump supporter who spreads conspiracy theories, like PizzaGate, and shills for the Proud Boys. She had an account with Chase Bank that was closed, because the banks…hate…conservatives? I guess? She then raised $34,000 on IndieGoGo.

Lindsay Shepherd was a Peterson acolyte who was reprimanded for showing a Peterson video in a class she was TAing (I actually think the reprimand was inappropriate), and has since gone on to a career as a speaker and columnist for far right media, and has a few multi-million dollar lawsuits against the university pending.

So, basically, in response to a request for names of people who have had their lives taken away by horrible SJWs, he listed people who are profiting from conspiracy theories about how horrible SJWs are taking away people’s lives. Please, could someone ruin my life this way?

I expressed my disbelief that he actually cited Jordan Peterson as someone whose life has been destroyed by SJWs. Here’s his nonsensical reply.

Jordan Peterson is a Genius Canadian Treasure. And the leftist propaganda machine have been trying to slander him for years. It’s not working because no one trusts the media, and Peterson makes sense. The fact that he’s successful isn’t evidence that he’s not been maligned. All the money he’s making is a result of free market choices. Which in the end, is the fairest measure of success.﻿

I think I’m done with these loons. Experiment successful. Once again, dishonest conservative blowhard is exposed for his lies, and once again, it makes no difference — it will be turned into profit and imaginary confirmation of the lies.

What else do you hate? Asking for a friend. » « Spider update!