George Will is what passes for an intelligent man on the conservative side, I suppose, but wow, but religion twists his brain into a pretzel. His latest illogical argument is about the Bladensburg cross. This thing. 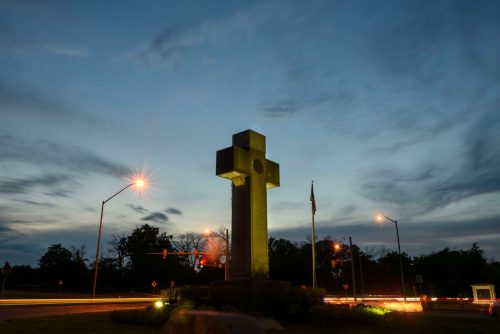 He thinks that the Supreme Court should rule that this is not a religious symbol. His arguments for this are, well, fucking stupid.

It was for reasons of traffic safety that the government in 1961 acquired the ground on which the Bladensburg cross sits. If, 58 years later, a few people in this age of hair-trigger rage choose to be offended by a long-standing monument reflecting the nation’s culture and traditions, those people, not the First Amendment, need help. The court should so rule when, sometime before this term ends in June, it announces its decision in this case, as the nine justices sit beneath a frieze that includes a symbol of religion: Moses with the Ten Commandments.

Bladensburg last had the nation’s attention because of the shambolic events of Aug. 24, 1814. President James Madison fled from there, where feeble American resistance enabled British soldiers to proceed to torch the president’s house and the Capitol. At Wednesday’s oral argument, the court, sitting across the street from the Capitol, can begin to tidy up its establishment clause jurisprudence that Justice Clarence Thomas correctly says is “in shambles.”

Here’s the enlightened reasoning he uses to arrive at this counterfactual conclusion.

The whole thing is ridiculous. This cross was dedicated as an explicitly Christian symbol.

Representative Stephen W. Gambrill of the Fifth Maryland District delivered the dedication address, in which he stated: “You men of Prince Georges County fought for the sacred right of all to live in peace and security and by the token of this cross, symbolic of Calvary, let us keep fresh the memory of our boys who died for a righteous cause.”1 An invocation was given by Rev. A.J. Carey, pastor of St. Jerome’s Catholic Church. Rev. B.P. Robertson, pastor of the First Baptist Church pronounced a benediction.

For a court that claims the intent of the authors of the Constitution must be respected to suddenly pretend that the plain intent, clear symbology, and openly stated purpose of a giant Christian cross can be disregarded so they can maintain a dishonest pretense is absurd to an extreme degree. This is Christian conservative hypocrisy.

But I’m a pragmatist. I’m willing to compromise. I’m willing to cut George Will and other fanatics some slack and let them have their obvious Jesus monument if they’ll concede that we can reinterpret the Second Amendment to mean that only official military organizations of the US government are free to bear arms. You know, that’s less insane than putting on a pious act that a Christian symbol of Calvary is nothing but two sticks at right angles to one another.

Jacob Wohl: In the running for dumbest person on the internet » « All right, what do I need to do to get a woman to look at me like this?